Last week while Dan and I were visiting the Lowry Park Zoo in Tampa, FL, the idea for this article began. We were watching the Birds of Prey show that they have daily. We had also watched the Bird shows at the National Aviary in Pittsburgh, PA back in August.

Both places present some very interesting birds and they are not on leashes. The birds have the freedom to move around on their own, yet they do not run or fly away. They may  have been spooked at times, in Pittsburgh, and they may have to go get them, but they eventually get them back. Both places had birds flying over the heads of the spectators and doing stunts, yet they were  being controlled by the trainers. In other words, they were “tamed.” 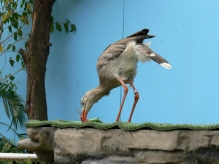 What they do is encourage the bird to perform something that is already one of its behaviors. For instance, both places brought out the Red-legged Seriema, which is a bird of prey, and gave it a plastic lizard. Both birds picked it up and slung it to the floor several times. This is the normal way they kill their prey. So this was an easy task for the birds, yet the trainers had to “train or tame” the bird to where it would do its behavior on command.

The Serierma was just one of many birds doing “behaviors on command” at the Zoo and the Aviary. I felt the breezes of hawks, owls, and an eagle flying just over my head. Below is a Slide show of some of the “tamed” birds at both places.

The Bible only mentions “tame” or “tamed” in two different places. The first is mentioned in Mark 5:3-4 when a man with an unclean spirit, who dwelt in the tombs, “and no one could bind him, not even with chains, because he had often been bound with shackles and chains. And the chains had been pulled apart by him, and the shackles broken in pieces; neither could anyone tame him.” Jesus healed him.

In James, we find the verses that tell about the birds being tamed. When we look around, we all can see many incidences of tamed critters and birds. Have you ever seen a critter tame a person? Man was given dominion over the critters in Genesis. Dominion did not mean what some think of today as subjugation, but it was more of use of, care of, learning from, and protecting them. Yet, God made man in His image, therefore man and woman are higher than the critters (all of them), not equal with them as some teach. Man has a “soul” which is accountable to God, the critters do not have a “soul.”

For every kind of beast and bird, of reptile and creature of the sea, is tamed and has been tamed by mankind. (James 3:7 NKJV)

The one thing that has a problem is the “tongue.” James goes on to say,

But no man can tame the tongue. It is an unruly evil, full of deadly poison. With it we bless our God and Father, and with it we curse men, who have been made in the similitude of God. Out of the same mouth proceed blessing and cursing. My brethren, these things ought not to be so. (James 3:8-10 NKJV)

These are some of the birds used in the shows or out and about with their trainers.