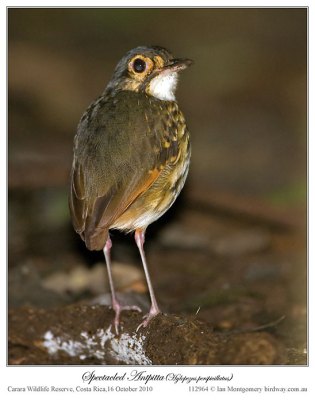 Ian’s Bird of the Week – Spectacled Antpitta ~ by Ian Montgomery

A friend of mine pointed out once that birds that stand upright and have short tails (long ones get in the way) look like little people and are consequently attractive. Penguins are the classic example, but there are plenty others, including the Pittas of Australia and Eurasia. Pittas don’t occur in the Americas but instead there are the unrelated but similar-looking Antpittas, members of the New World family Formicariidae, which occur from Mexico southwards.

Antpittas have similar habits to true Pittas and rummage around in leaf-litter in tropical and sub-tropical forest looking for invertebrate prey such as snails and worms. They are also easier to hear than see, so it was a pleasant surprise when we stumbled on this Spectacled Antpitta in Carara Wildlife Reserve in Costa Rica. It moved off through the undergrowth,but I struggled after it encumbered by a large lens and flash and managed to get a few photos of it peering suspiciously at me over its shoulder before disappearing. Incidentally, there are various groups of Central and South American birds, collectively called Antbirds, so named because some of them are found in association with army ants and feed on prey disturbed by the flow of ants across the landscape. 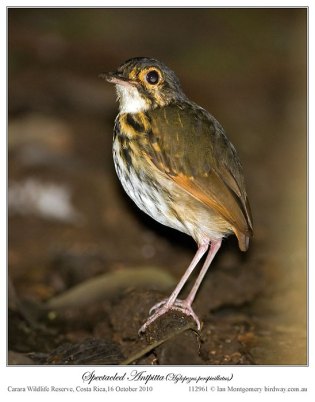 Recent additions to the website include the odd Yellow-thighed Finch – not a finch but a member of the Emberizidae – from Costa Rica and additional photos of a couple of terns from closer to home: the Little Tern and the Caspian Tern.

Thanks Ian, for another great bird to find out about. Ian uses the Bird International list and we use the I.O.C.’s list of birds. The Spectacled Antpitta and the Streak-chested Antpitta are one in the same bird. That is where knowing the scientific name, “Hylopezus perspicillatus,” comes in handy. By either name, it does have a neat voice and below is a video link to one singing that I located.

The Antpittas are in the Grallariidae Family (IOC) of the Passeriformes Order.