On the way to church I thought I saw them; however, they flew so fast back and forth I wasn’t sure. The next day I was sure! The Robins had returned. Only a few were in my trees. At first I was disappointed, but at least I could hear lots of them in my neighborhood. I sent them many invitations in my thoughts as I worked in the yard, but they did not come. 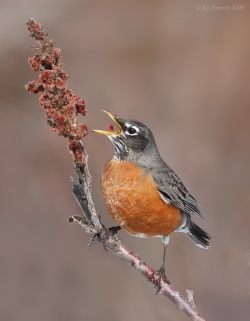 As I worked, I began to hear very high sweet sounds coming from some medium sized black birds. How thankful I was for their “music.” Then it ceased and I realized why when I saw the shadow of the Cooper’s Hawk come across the yard. He frequents our area almost daily, and I now realize why I have fewer birds come to my feeders. He is a beautiful specimen but my heart does not welcome him.

Well I promised last year I would not speak again of the Robin’s bad manners, so this year I shall not fault them for a lack of a good showing. They had a very good reason. I shall remain satisfied they were around and be thankful for that.

See her article from last year – When The Robins Came

Even the stork in the sky Knows her seasons; And the turtledove and the swift and the thrush Observe the time of their migration; But My people do not know The ordinance of the LORD. (Jeremiah 8:7 NASB)

Listen to the – American Robin’s song -from xeno-canto.com

The American Robin (Turdus migratorius) is a member of the Thrush – Turdidae Family. As Dorothy (“Dottie” to me) knows, they only pass through on their migration journey. This time of the year, they are on their way north.

“The American Robin is widely distributed throughout North America, wintering south of Canada from Florida to central Mexico and along the Pacific Coast. The American Robin is active mostly during the day, and on its winter grounds it assembles in large flocks at night to roost in trees in secluded swamps or dense vegetation. The flocks break up during the day when the birds feed on fruits and berries in smaller groups. During the summer, the American Robin defends a breeding territory and is less social. It is the state bird of Connecticut, Michigan, and Wisconsin.” (Wikipedia)
*