Ian’s Bird of the Week – Pacific Robin ~ by Ian Montgomery

The Pacific Robin was another bird that I was keen to photograph on Norfolk Island. It has only recently been split from the mainland Scarlet Robin and, until that happened, it attracted little attention. As a consequence, I had trouble sourcing photos, particularly of adult males, and getting reliable material for the description of the species for the digital version of the Australian field guide by Pizzey and Knight.

It’s not common on Norfolk Island with an estimated population of 400-500 species and its distribution is restricted to areas of native forest. Happily, there was a resident family at the place, Palm Glen, where we did regular evening vigils for the Norfolk Island Parakeet and, being more confiding than Scarlet Robins, the members of the family proved to be good subjects for photography. The first photo shows the adult male. At first glance, it looks like a small Scarlet Robin, but closer examination reveals the diagnostic lack of white on the flight feathers of the wing and the outer tail feathers: the only white on the wing is the secondary wing coverts. Another supposed difference is a smaller area of white on the forehead, but this bird at least seemed to me to show much more white, extending back to a point above  the rear of the eyes. If you’re interested, compare with http://www.birdway.com.au/petroicidae/scarlet_robin/index.htm . 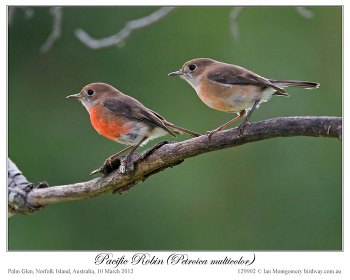 The second photo shows the adult female, left, and the juvenile, right, posing obligingly for comparison. Both lack the obvious white forehead spot characteristic of, in fact diagnostic of, their Scarlet Robin counterparts and also lack white in the outer tail feathers. The colours are also richer and the wing stripes are a deeper buff, almost blending with the buffish-brown of the rest of the wings and back. The third photos shows the same female face-on, and the lack of the white spot is more obvious: there is only slight white scalloping. 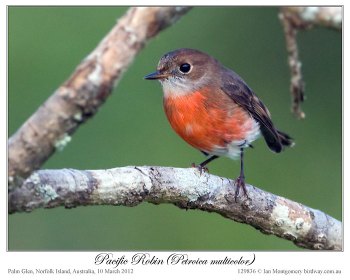 The fourth photo is another shot of the same juvenile, showing the lack of white on the outer tail feathers. 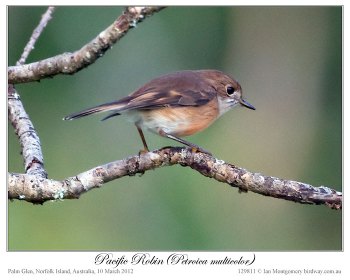 Having noticed the large amount of white on the forehead of the male, I kept an eye out for another individual and eventually photographed this one, fifth photo, on nearby Mount Pitt. This too had a large white spot. 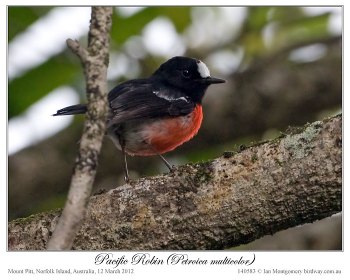 The Pacific Robin, as now described, is quite widely distributed on islands in the South Pacific from the Solomons in the north via Vanuata and Fiji to Norfolk Island in the south. It is quite variable in plumage and 14 races have been described. It is closely related to the Tomtit of New Zealand, the males of which vary in colour from the white-breasted (North Island), through yellow-breasted (South Island) to the complete black race on the Snares: http://www.birdway.com.au/petroicidae/tomtit/index.htm. There is clearly enough material here to keep a South-sea-island-loving taxonomist busy for at least a lifetime and I won’t say anything further except to note an interesting historical twist in the story of the splitting of the Pacific and Scarlet Robins.

Norfolk Island was settled in the same year as Sydney, 1788, and one result of that was that the Scarlet Robin was described using a Norfolk Island specimen (the type specimen) by German Naturalist Johann Gmelin in 1789 and given the specific name multicolor. When the species was split 210 years later, the rules governing taxonomy insist that this name remains with the Norfolk Island bird, so the mainland species becomes the new one and was named boodang after the SE Australian race (up till thenPetroica multicolour boodang). To avoid confusion in Australia (at the risk maybe of increasing it in the Pacific Islands) the common name Scarlet was transferred to the new species and the new name Pacific was given to the old species.

I’m sure this family of birds at Palm Glen would be astounded to learn that their kind is the subject of such intense scrutiny!

He answered and said to them, “When it is evening you say, ‘It will be fair weather, for the sky is red’; (Matthew 16:2 NKJV)

Those changes aught to keep the Bird Guide writers busy keeping up with the divisions and name changing. What a gorgeous bird and fantastic photography. Thanks again, Ian, for sharing all these great birds.

“The Pacific Robin is a seasonal breeder, although the timing of the breeding season varies across its range. Information on the timing of the season is patchy or absent in many islands. On Norfolk Island the breeding season is from September to December, and in Vanuatu the season is from October to January. Parents with young have been seen in mid August in the Solomon Islands and in June through to September in Samoa. The species builds a compact nest which is a cup of plant fibres and spider webs. The outside of the nest is decorated with moss and lichen, and is therefore easily overlooked. The nest is usually set into a fork or stump on a tree branch, or on a horizontal branch.

Around two to four eggs are laid in each clutch, with two being the typical clutch size in Norfolk Island, and two to three being typical in Fiji. The eggs are dull grey or greenish, and are incubated by the female. The nests of Pacific Robins are parastised by Fan-tailed Cuckoos where the two species co-occur.” (Wikipedia)