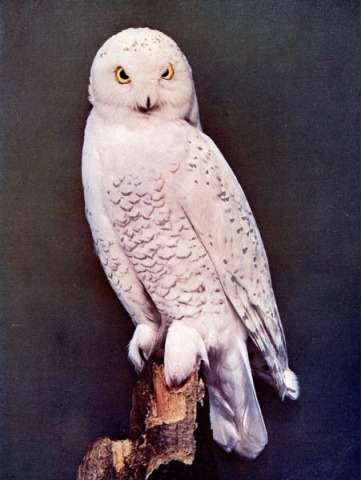 EW of all the groups of birds have such decided markings, such characteristic distinctions, as the Owl. There is a singular resemblance between the face of an Owl and that of a cat, which is the more notable, as both of these creatures have much the same habits, live on the same prey, and are evidently representatives of the same idea in their different classes. The Owl, in fact, is a winged cat, just as the cat is a furred owl.

The Snowy Owl is one of the handsomest of this group, not so much on account of its size, which is considerable, as by reason of the beautiful white mantle which it wears, and the large orange eyeballs that shine with the lustre of a topaz set among the snowy plumage.

It is a native of the north of Europe and America, but is also found in the more northern parts of England, being seen, though rather a scarce bird, in the Shetland and Orkney Islands, where it builds its nest and rears its young. One will be more likely to find this owl near the shore, along the line of salt marshes and woody stubble, than further inland. The marshes do not freeze so easily or deep as the iron bound uplands, and field-mice are more plentiful in them. It is so fleet of wing that if its appetite is whetted, it can follow and capture a Snow Bunting or a Junco in its most rapid flight.

Like the Hawk Owl, it is a day-flying bird, and is a terrible foe to the smaller mammalia, and to various birds. Mr. Yarrell in his “History of the British Birds,” states that one wounded on the Isle of Balta disgorged a young rabbit whole, and that a young Sandpiper, with its plumage entire, was found in the stomach of another.

In proportion to its size the Snowy Owl is a mighty hunter, having been detected chasing the American hare, and carrying off wounded Grouse before the sportsman could secure his prey. It is also a good fisherman, posting itself on some convenient spot overhanging the water, and securing its finny prey with a lightning-like grasp of the claw as it passes beneath the white clad fisher. Sometimes it will sail over the surface of a stream, and snatch the fish as they rise for food. It is also a great lover of lemmings, and in the destruction of these quadruped pests does infinite service to the agriculturist.

The large round eyes of this owl are very beautiful. Even by daylight they are remarkable for their gem-like sheen, but in the evening they are even more attractive, glowing like balls of living fire.

From sheer fatigue these birds often seek a temporary resting place on passing ships. A solitary owl, after a long journey, settled on the rigging of a ship one night. A sailor who was ordered aloft, terrified by the two glowing eyes that suddenly opened upon his own, descended hurriedly to the deck, declaring to the crew that he had seen “Davy Jones a-sitting up there on the main yard.”

What do you think of this bird with his round, puffy head? You of course know it is an Owl. I want you to know him as the Snowy Owl.

Don’t you think his face is some like that of your cat? This fellow is not full grown, but only a child. If he were full grown he would be pure white. The dark color you see is only the tips of the feathers. You can’t see his beak very well for the soft feathers almost cover it.

His large soft eyes look very pretty out of the white feathers. What color would you call them? Most owls are quiet during the day and very busy all night. The Snowy Owl is not so quiet day times. He flies about considerably and gets most of his food in daylight.

A hunter who was resting under a tree, on the bank of a river, tells this of him:

“A Snowy Owl was perched on the branch of a dead tree that had fallen into the river. He sat there looking into the water and blinking his large eyes.

Suddenly he reached out and before I could see how he did it, a fish was in his claws.”

This certainly shows that he can see well in the day time. He can see best, however, in the twilight, in cloudy weather or moonlight. That is the way with your cat.

The wing feathers of the owl are different from those of most birds. They are as soft as down. This is why you cannot hear him when he flies. Owls while perching are almost always found in quiet places where they will not be disturbed.

Did you ever hear the voice of an owl in the night? If you never have, you cannot imagine how dreary it sounds. He surely is “The Bird of the Night.” 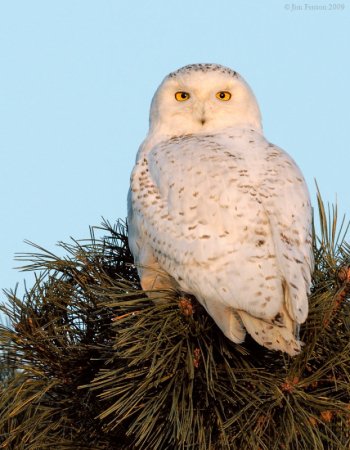 The Owl is mentioned 8 times in the NKJV of the Bible and it qualifies as a Bird of the Bible. These verses are from the “unclean” list:

the white owl, the jackdaw, and the carrion vulture; (Leviticus 11:18 NKJV)

The Snowy Owl is in the Strigidae – Owls Family which currently has 211 species. There are two families that make up the Strigiformes Order, the Owls and the Barn Owls – Tytonidae Family.

Because Snowy Owls live in cold weather often, they have feathers that cover most of their legs and feet. The Lord has provided extra protection for them this way. A lack of pigment leaves extra space in the feathers to help keep them warm and also is the reason they are so white. Also being white helps protect them from being seen so well in snow. Another interesting thing is that they hunt in the daytime more than regular owls. When you live way up north by the Arctic Circle, the sun never sets for periods of time. An owl could get might hungry waiting for darkness to go hunting.

From xeno-canto the call of a pair of Snowy Owls

The Snowy Owl is a large owl and is the official bird of Quebec. It goes by several names, such as, the Arctic Owl, Great White Owl, Icelandic Snow Owl, or Harfang. 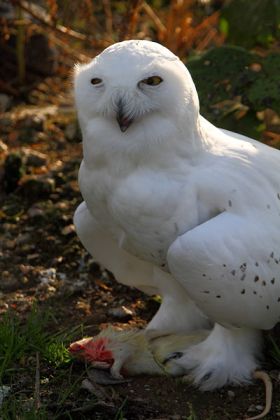 “Most of the owls’ hunting is done in the “sit and wait” style; prey may be captured on the ground, in the air or fish may be snatched off the surface of bodies of water using their sharp talons. Each bird must capture roughly 7 to 12 mice per day to meet its food requirement and can eat more than 1,600 lemmings per year.
Snowy Owls, like many other birds, swallow their small prey whole. Strong stomach juices digest the flesh, while the indigestible bones, teeth, fur, and feathers are compacted into oval pellets that the bird regurgitates 18 to 24 hours after feeding. Regurgitation often takes place at regular perches, where dozens of pellets may be found. Biologists frequently examine these pellets to determine the quantity and types of prey the birds have eaten. When large prey are eaten in small pieces, pellets will not be produced.

Though Snowy Owls have few predators, the adults are very watchful and are equipped to defend against any kind of threat towards them or their offspring. During the nesting season, the owls regularly defend their nests against arctic foxes, corvids and swift-flying jaegers; as well as dogs, gray wolves and avian predators. Males defend the nest by standing guard nearby while the female incubates the eggs and broods the young. Both sexes attack approaching predators, dive-bombing them and engaging in distraction displays to draw the predator away from a nest.” (Wikipedia)

Next Article –June, Birds And Farmers