THE RACE BETWEEN THE SECRETARY BIRDS

Mongo Got Quite a Bit Ahead.

“Well, on the afternoon of the races they all entered, and you never saw such running in all your life! They simply went like the wind, but the chief race of all was between one bird named Sandy and one named Mongo. They were considered the fastest runners of all. They had raced often and often before and had always come in a tie. But this time Mongo had been practising [p.29]very hard and had been very careful not to eat anything to hurt his wind. Sandy had been practising every day, too, but he thought it was absurd to give up things to eat. However, Mongo had always heard that all athletes were very careful of their eating, and, as he had never been able to beat Sandy yet, he was bound he would try everything he could so as to win.

“The prize was to be a fine, great, big snake which had been captured and killed a few days before the races were to take place.”

“Yes,” said daddy; “they practically live on them.”

“I shouldn’t think that would be nice food,” added Evelyn.

“No, we don’t think so,” answered daddy, “but you know we eat bacon and like it, so probably the secretary birds think it is as funny for us to eat pigs as we do to hear of their eating snakes.”

“No,” said Evelyn thoughtfully, “I suppose not. They sound so horrid, though.”

[p.30]At that moment Jack, who was growing very impatient, not caring what the secretary birds ate, chimed in: “Daddy, please hurry and tell us who won the race. I can hardly wait to hear. I am sure Mongo did, though.”

“No,” said Evelyn; “I think Sandy did because he wasn’t such an old fuss as Mongo.”

“Well,” continued daddy, “during the race all the secretary birds shrieked in their cackling voices: ‘Go it; go it! Win, Mongo! Win, Sandy!’

“For a few moments Mongo got quite a bit ahead, but Sandy succeeded in catching up with him, and they passed by the goal side by side.

“It was a splendid race, but it showed that Mongo and Sandy were really absolutely evenly matched, so they gave a funny cackle, which meant a laugh, and each, taking an end of the prize, said, ‘We’ll all have a taste of the prize, as neither of us can win it.’

“So they all sat down to a very jolly supper party.” 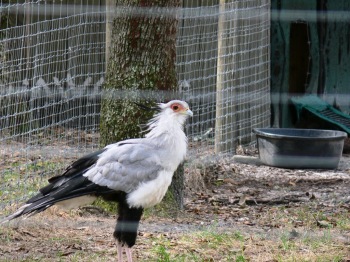