The Visitor Center at Jackson Hole, Wyoming (“Jackson Hole & Greater Yellowstone Visitor Center”), is a good place to go to for information on Grand Teton National Park, which borders the more-famous Yellowstone National Park.  Yet for bird-lovers, the visitor’s center itself is an attraction, in summer, because the marshy ponded area next to the building hosts a congregation of blackbirds, both Red-winged Blackbirds (Agelaius phoeniceus) and Yellow-headed Blackbirds (Xanthocephalus xanthocephalus).

If you are helping city kids to see these passerine icterids, tell them to “look for the tall corny-dogs growing in the wild” (cattails – Typha species, tall-stemmed wetland plants topped by a sausage-shaped flowering “spike”), around the pond.

As in many other lacustrine marshlands, red-winged blackbirds are often found perched among the cattails that grow as emergents among the wavy shoreline of pond.  For a redwing this is “prime real estate”, until the yellow-heads move in. How so?  In cattail dominated marsh-ponds, if both yellow-heads and red-wings are both present, the innermost places of the cattail “ring” are routinely occupied by the yellow-headed blackbirds, leaving the “outer” cattail positions (i.e., slightly farther away from the pond-water) for the redwings. 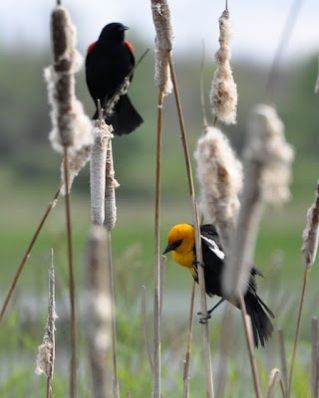 But it reminds me of the dramatic difference between the apostle Peter and the Pharisee Nicodemus.  Peter was (almost) always close to Christ, and often so, but Nicodemus mostly kept his distance from Christ, at least publicly.

Far from being infallible, Peter is infamous for his cowardice that was indicted by a rooster crowing thrice (Luke 22:54-61).  Peter is also remembered for getting distracted, and becoming fearful, and sinking into the Sea of Galilee, after having miraculously walked on water for only a few steps (Matthew 14:24-33).  But Peter was wise enough to immediately cry out “Lord, save me!”  (And Jesus did.)  At least Peter did some walking on water (at Christ’s command, of course), which is a lot better than the other disciples who just stayed in the boat, as mere spectators, wonderfully how Jesus was enabling Peter to walk on water. 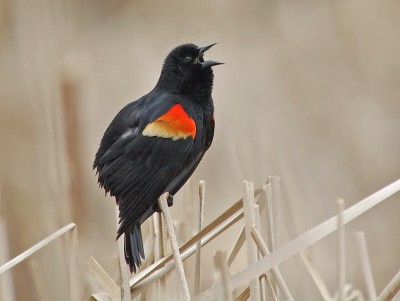 Likewise, Peter had the courage to step up and speak up – to call Jesus “the Christ, the Son of the living God” – a deed that the Lord Jesus commended Peter  — and God the Father —  for doing (Matthew 16:15-17).  And Peter did what he could to defend Jesus, in the Garden of Gethsemane, as Jesus was being arrested – Peter used a sword to chop off one man’s ear (Luke 22:49-51; John 18:10-11)!  (But unlike the Orcadian Viking known to history as Thorfinn Skull-splitter, Peter missed most of his victim’s head.)  It’s the thought that counts, right?

So you really have to love Peter.  (Jesus certainly did!)  Peter was one of the “inner” circle of three  –  just James, John, and Peter  — who were invited to witness the Lord Jesus Christ being glorified upon the Mount of Transfiguration (Matthew 17:1-8).  What an unforgettable privilege that was (2nd Peter 1:16-18)!  Jesus later invited the same “inner circle” of three to pray for Him in the Garden of Gethsemane (Matthew 26:37-38).  With all his faults, Peter was a truly privileged member of Christ’s “inner circle”.

But Peter’s privileges are not so high that we should feel sorry for Nicodemus.  Not at all!

What a privilege it was for Nicodemus to be the first listener to hear, what we now read in, John’s third chapter (John 3:1-9), including the everlastingly famous promise of John 3:16, spoken by Jesus Himself!  Later Nicodemus took a modest stand for Jesus (John 7:50-52), and in time Nicodemus had an official role in Christ’s burial (John 19:39-40) three days before Jesus rose triumphantly from the grave!

Even so, if one had the choice, why visit Christ, in secret, keeping a distance from Him in public, when the opportunity to belong to His “inner circle” is available?

Am I more like Peter or Nicodemus?  Maybe that question will come to mind next time you see a group of “inner circle” yellow-headed blackbirds, perching on cattails, as the “outer circle” of cattails hosts the red-winged blackbirds. And, if you like the idea of being in the Lord’s “inner circle”, you might sing this as a prayer:  “Just a closer walk with Thee…”

James J. S. Johnson, with his family, has repeatedly visited Wyoming’s Jackson Hole Visitor Center, in summer, to admire the yellow-headed and red-winged blackbirds that congregate on and among the pond-ringed cattails there. (And a very special thank-you to Lee for teaching me how to edit the typos in this blog.)

3 thoughts on “Yellow-headed and Red-winged Blackbirds: Living on the Inside or the Outside?”