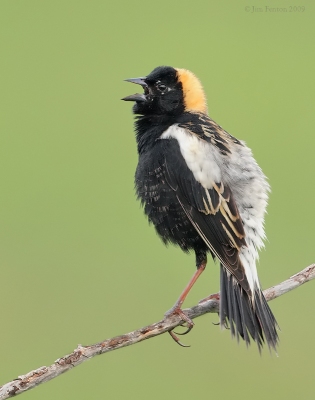 More of the Blackbird Family

The Orchard Oriole and the Bobolink.

CHAPTER 13. More of the Blackbird Family.

Peter Rabbit was dozing. Yes, sir, Peter was dozing. He didn’t mean to doze, but whenever Peter sits still for a long time and tries to think, he is pretty sure to go to sleep. By and by he wakened with a start. At first he didn’t know what had wakened him, but as he sat there blinking his eyes, he heard a few rich notes from the top of the nearest apple-tree. “It’s Goldy the Oriole,” thought Peter, and peeped out to see.

But though he looked and looked he couldn’t see Goldy anywhere, but he did see a stranger. It was some one of about Goldy’s size and shape. In fact he was so like Goldy, but for the color of his suit, that at first Peter almost thought Goldy had somehow changed his clothes. Of course he knew that this couldn’t be, but it seemed as if it must be, for the song the stranger was singing was something like that of Goldy. The stranger’s head and throat and back were black, just like Goldy’s, and his wings were trimmed with white in just the same way. But the rest of his suit, instead of being the beautiful orange of which Goldy is so proud, was a beautiful chestnut color.

Peter blinked and stared very hard. “Now who can this be?” said he, speaking aloud without thinking. 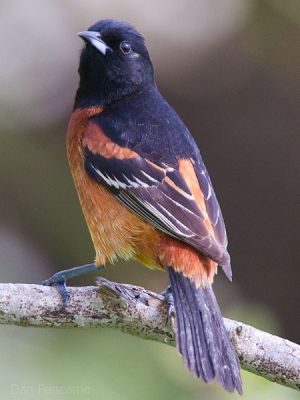 “Don’t you know him?” asked a sharp voice so close to Peter that it made him jump. Peter whirled around. There sat Striped Chipmunk grinning at him from the top of the old stone wall. “That’s Weaver the Orchard Oriole,” Striped Chipmunk rattled on. “If you don’t know him you ought to, because he is one of the very nicest persons in the Old Orchard. I just love to hear him sing.”

“Of course,” retorted Striped Chipmunk. “I shouldn’t think you would have to look at him more than once to know that. He’s first cousin to Goldy. There comes Mrs. Weaver. I do hope they’ve decided to build in the Old Orchard this year.”

“I’m glad you told me who she is because I never would have guessed it,” confessed Peter as he studied the newcomer. She did not look at all like Weaver. She was dressed in olive-green and dull yellow, with white markings on her wings.

Peter couldn’t help thinking how much easier it must be for her than for her handsome husband to hide among the green leaves.

As he watched she flew down to the ground and picked up a long piece of grass. “They are building here, as sure as you live!” cried Striped Chipmunk. “I’m glad of that. Did you ever see their nest, Peter? Of course you haven’t, because you said you had never seen them before. Their nest is a wonder, Peter. It really is. It is made almost wholly of fine grass and they weave it together in the most wonderful way.”

“Do they have a hanging nest like Goldy’s?” asked Peter a bit timidly.

“Not such a deep one,” replied Striped Chipmunk. “They hang it between the twigs near the end of a branch, but they bind it more closely to the branch and it isn’t deep enough to swing as Goldy’s does.”

Peter had just opened his mouth to ask another question when there was a loud sniffing sound farther up along the old stone wall. He didn’t wait to hear it again. He knew that Bowser the Hound was coming.

“Good-by, Striped Chipmunk! This is no place for me,” whispered Peter and started for the dear Old Briar-patch. He was in such a hurry to get there that on his way across the Green Meadows he almost ran into Jimmy Skunk before he saw him.

“Bowser the Hound almost found me up in the Old Orchard,” panted Peter. “It’s a wonder he hasn’t found my tracks. I expect he will any minute. I’m glad to see you, Jimmy, but I guess I’d better be moving along.”

Peter hesitated. He wanted to gossip, but he still felt nervous about Bowser the Hound. However, as he heard nothing of Bowser’s great voice, telling all the world that he had found Peter’s tracks, he decided to stop a few minutes. “What are you doing down here on the Green Meadows?” he demanded.

Jimmy grinned. “I’m looking for grasshoppers and grubs, if you must know,” said he. “And I’ve just got a notion I may find some fresh eggs. I don’t often eat them, but once in a while one tastes good.”

“If you ask me, it’s a funny place to be looking for eggs down here on the Green Meadows,” replied Peter. “When I want a thing; I look for it where it is likely to be found.”

“Just so, Peter; just so,” retorted Jimmy Skunk, nodding his head with approval. “That’s why I am here.”

Peter looked puzzled. He was puzzled. But before he could ask another question a rollicking song caused both of them to look up. There on quivering wings in mid-air was the singer. He was dressed very much like Jimmy Skunk himself, in black and white, save that in places the white had a tinge of yellow, especially on the back of his neck. It was Bubbling Bob the Bobolink. And how he did sing! It seemed as if the notes fairly tumbled over each other.

Jimmy Skunk raised himself on his hind-legs a little to see just where Bubbling Bob dropped down in the grass. Then Jimmy began to move in that direction. Suddenly Peter understood. He remembered that Bubbling Bob’s nest is always on the ground. It was his eggs that Jimmy Skunk was looking for.

“You don’t happen to have seen Mrs. Bob anywhere around here, do you, Peter?” asked Jimmy, trying to speak carelessly.

“No,” replied Peter. “If I had I wouldn’t tell you where. You ought to be ashamed, Jimmy Skunk, to think of robbing such a beautiful singer as Bubbling Bob.”

“Pooh!” retorted Jimmy. “What’s the harm? If I find those eggs he and Mrs. Bob could simply build another nest and lay some more. They won’t be any the worse off, and I will have had a good breakfast.”

“But think of all the work they would have to do to build another nest,” replied Peter.

“I should worry,” retorted Jimmy Skunk. “Any one who can spend so much time singing can afford to do a little extra work.”

With this, Peter once more headed for the dear Old Briar-patch, while Jimmy Skunk continued toward the place where Bubbling Bob had disappeared in the long grass. Peter went only a short distance and then sat up to watch Jimmy Skunk. Just before Jimmy reached the place where Bubbling Bob had disappeared, the latter mounted into the air again, pouring out his rollicking song as if there were no room in his heart for anything but happiness. Then he saw Jimmy Shrunk and became very much excited. He flew down in the grass a little farther on and then up again, and began to scold.

It looked very much as if he had gone down in the grass to warn Mrs. Bob. Evidently Jimmy thought so, for he at once headed that way. When Bubbling Bob did the same thing all over again. Peter grew anxious. He knew just how patient Jimmy Skunk could be, and he very much feared that Jimmy would find that nest. Presently he grew tired of watching and started on for the dear Old Briar-patch. Just before he reached it a brown bird, who reminded him somewhat of Mrs. Redwing and Sally Sly the Cowbird, though she was smaller, ran across the path in front of him and then flew up to the top of a last year’s mullein stalk. It was Mrs. Bobolink. Peter knew her well, for he and she were very good friends.

“Oh!” cried Peter. “What are you doing here? Don’t you know that Jimmy Skunk, is hunting for your nest over there? Aren’t you worried to death? I would be if I were in your place.”

Mrs. Bob chuckled. “Isn’t he a dear? And isn’t he smart?” said she, meaning Bubbling Bob, of course, and not Jimmy Skunk. “Just see him lead that black-and-white robber away.”

Peter stared at her for a full minute. “Do you mean to say,” said he “that your nest isn’t over there at all?” 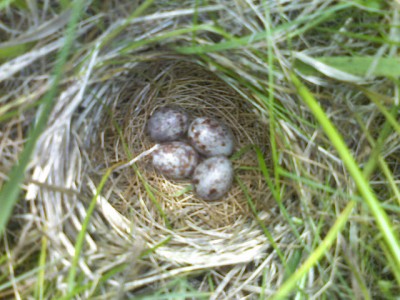 Mrs. Bob chuckled harder than ever. “Of course it isn’t over there,” said she.

“Then where is it?” demanded Peter.

“That’s telling,” replied Mrs. Bob. “It isn’t over there, and it isn’t anywhere near there. But where it is is Bob’s secret and mine, and we mean to keep it. Now I must go get something to eat,” and with a hasty farewell Mrs. Bobolink flew over to the other side of the dear Old Briar-patch.

Peter remembered that he had seen Mrs. Bob running along the ground before she flew up to the old mullein stalk. He went back to the spot where he had first seen her and hunted all around in the grass, but without success. You see, Mrs. Bobolink had been quite as clever in fooling Peter as Bubbling Bob had been in fooling Jimmy Skunk.

He who dwells in the secret place of the Most High Shall abide under the shadow of the Almighty. I will say of the LORD, “He is my refuge and my fortress; My God, in Him I will trust.” (Psalms 91:1-2 NKJV)

Next Chapter (Bob White and Carol the Meadow Lark)

3 thoughts on “More of the Blackbird Family – Chapter 13”