“He hath made his wonderful works to be remembered: the LORD is gracious and full of compassion.” (Psalm 111:4)

Birds and insects that take nectar from a flower without picking up any pollen are known as nectar robbers. Now, you’d probably think that nectar robbers would be harmful to plants and trees, but the desert teak tree couldn’t survive without a nectar robber – the purple sunbird. 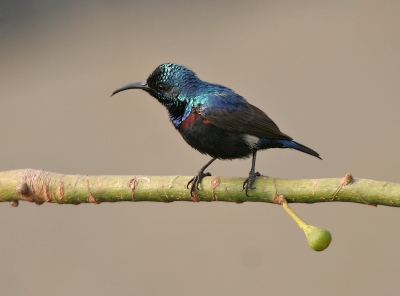 In order to reproduce, this tree needs birds to pollinate its flowers. But since a tree cannot reproduce with its own pollen, it needs birds to fly from flower to flower and from one tree to another. Anything that encourages the pollinating birds to fly farther away helps out the teak trees.

That’s where the purple thief comes in. Researchers at the University of Delhi discovered that the sunbird visits the flowers one hour before the pollinating birds arrive. The purple sunbird has a long, sharp beak that pierces the base of the flower to feed, so it doesn’t pick up any pollen. It does, however, empty the flower of about 60 percent of its nectar, leaving relatively little for the pollinators. This means that the pollinators will have to travel to more flowers and trees to get enough food, spreading pollen wherever they stop for a meal.

The researchers noted that “the robber plays a constructive and crucial role in the reproductive performance of [a] threatened tree species.” How right they are. And this unusual but crucial dining arrangement shows once again what an ingenious God we serve!

Lord, only You could come up with such an ingenious way to help the desert teak tree to reproduce! Surely such an arrangement could not have come about through blind chance! Amen.

Sunbirds belong to the Nectariniidae – Sunbirds Family which currently has 143 species. They are amazing colored by their Creator and well designed for the plants they pull the nectar from.

From Sunday Inspiration – Sunbirds, “These are very small passerine birds. Most sunbirds feed largely on nectar, but also take insects and spiders, especially when feeding young. Flower tubes that bar access to nectar because of their shape, are simply punctured at the base near the nectaries. Fruit is also part of the diet of some species. Their flight is fast and direct on their short wings.

The family is distributed throughout Africa, the Indian Subcontinent, Southeast Asia and just reaches northern Australia.

Who Paints the Leaves