A characteristic sound of montane forests in New Caledonia is the far-carrying call of this splendid pigeon, the Goliath or New Caledonian Imperial Pigeon. The tone is similar to someone blowing in a (large) bottle but the rhythm accelerates like the sound of a table-tennis ball being dropped on a table. Needless to say, we started calling it the ping-pong pigeon. We first heard them in the dense forests of Rivière Bleue, but had trouble actually seeing any apart from one that flew off from feeding on Pandanus fruit. We eventually tracked this one through the forest and found it putting on a display.

The display is similar to that of the domestic pigeon, alternating between puffing out the crop to show the silvery-tipped bifurcated feathers to best advantage (first photo) and bowing (second photo). The head, upperparts and breast are a steely grey while the breast is a rich rufous colour and the vent pale. The iris is a vivid orange red. With a length of up to 51cm/20in and weighing up to 720g/1.6lb, this is a huge pigeon, which unfortunately makes it good to eat. For comparison the Torresian (Pied) Imperial Pigeon of northern and northeastern Australia measures up to 44cm in length and 550g in weight.

It is endemic to the main island of New Caledonia (Grande Terre) and the Isle of Pines. The population has suffered from habitat loss and hunting, so it remains common only in protected areas and is currently listed as Near Threatened. After our hard work finding it in Rivière Bleue we were amused to find one on perched in the open on a power line beside the road to Mount Koghi two days later, third photo. We also heard several and photographed one at Les Grandes Fougères.

The subject of each bird of the week is usually a species that hasn’t featured previously. This tends to mean that I don’t get to share with you new photos of previous subjects. So I’ve decided to include random photos from time to time, such as this one of a Noisy Pitta. I was contacted by a neighbour recently with a wonderful, well-watered garden in which this Pitta has recently taken up residence. Pittas are such beautiful birds and I like this photo because of the way the bird is framed by the leaves behind it.

P.S. (Be warned: this is a commercial break!) Did you know that some ebook sellers provide facilities of giving book as gifts. Maybe you know someone who would enjoy Where to Find Birds in Northeastern Queensland ($13.20 to $22). Kobo books has ebook readers from most devices and computer so check out their page on gifts. With Kobo you go to this page first and then browse for the item you want to give. With Apple iPads and iPhones, you find the item first e.g. Where to Find Birds on Northeastern Queensland in the iTunes Store and then select the Share icon at top right and select Gift: 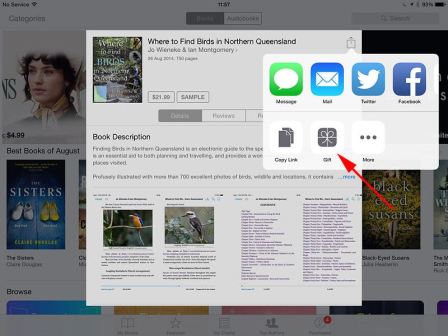 I haven’t found a similar facility in the iTunes store accessed from an Apple computer (the share icon is peculiar to iOS). You can however give gift cards with suggestions from iTunes, Google Play and Kobo.

And a champion went out of the camp of the Philistines named Goliath of Gath, whose height was six cubits and a span [almost ten feet]. (1 Samuel 17:4 AMP)

We have seen the Victoria Crowned Pigeons at Zoos and they are typically 73 to 75 cm (29 to 30 in) long. Ian’s 51cm/20in Goliath Imperial Pigeon is not too far behind. The well-known rock dove is 29 to 37 cm (11 to 15 in) long, for comparison.  However you look at it, they are quite big. One source mentioned that the Goliaths are very strong flyers.

That is also a great photo of the Noisy Pitta. Thanks, Ian for sharing your photos with us each week (or whenever).

Ian’s Bird of the Week newsletters