(Sandra Conner, my Christian friend, that writes great blogs, books and a whole lot more, has taken me up on the challenge to write about the Great Grey Owl.)

Here is her tale about our owl:

“Lee Dusing, over at Lee’s Birdwatching Adventures Plus, has posted the picture on her site of this owl with his eyes bulging as he takes in some scene before him. Lee has asked us to write a caption or a story based on the picture — taken by Peter K. Burian.  So, naturally, I had to take up the challenge — even though I’m not much of an owl person in general. My story is below the picture. 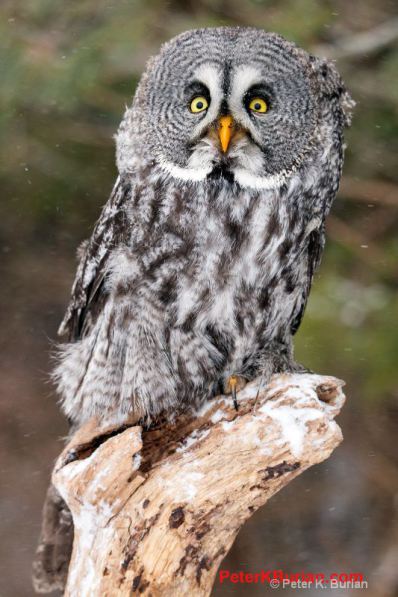 HISTORY THROUGH THE EYES OF OGDEN OWL

Ogden Owl couldn’t believe his eyes. He was sure they must be bulging because he was straining so hard to see what was really going on. He’d lived in these sparse clumps of trees close to the sandy beaches of Kitty Hawk, NC, for almost three years now, and ever since he’d moved here, there had been some strange things going on.

Two human beings had spent months at a time out on the sandy stretches of land between the hills, half rolling – half carrying – some contraption that looked a little like a huge, ugly bird, but that seemed to be bound to move on the ground. Ogden was usually up doing his hunting during the night, and by morning, he was ready to get some rest, so he hadn’t bothered with the humans much, except to shake his head at their ability to waste time and energy out here on this almost barren stretch of land.

But early this morning, when he really should have been considering getting some rest again, he had noticed that the two human beings had an even bigger monster of a machine – even more ugly – and this time it made a horrible noise as they moved it across the ground.  They pushed it onto some kind of inclined track, and the next thing Ogden knew, one of the men seemed to climb right into the middle of the machine.

Ogden could hardly hold his eyes open, but he was determined to find out what was going on practically right under his nose. Suddenly the huge machine began moving along the inclined track, picking up speed, and then, to Ogden’s astonishment – and horror – it lifted up from the ground, all the time making a roaring noise. It seemed to catch the wind with its enormous wings and sailed through the air just like he did when he took off from his tree limb and weaved through the sky looking for food.

It couldn’t be! Surely not! Human beings flying??? His eyes stayed glued to the scene. For long seconds, the huge, ugly contraption floated and soared – and scared the heck out of Ogden.

When the machine came back down to the ground and sat down without breaking apart, Ogden took a deep breath. He hadn’t realized that he had been holding his breath the whole time he watched that ugly, noisy machine fly. He shook his head now and stirred restlessly on the branch where he sat. He sighed and stretched his wings a little, wanting to feel their strength once more before he moved back onto one of the hidden branches of his tree to get some rest. He felt sad – and fearful. He had a feeling that life was never going to be the same again after today.  ~”

Source: History Through the Eyes of Ogden Owl

I have enjoyed reading several of her online stories, plus I have read her three latest novels:

5 thoughts on “History Through the Eyes of Ogden Owl”