Ian’s Bird of the Week – New Zealand Pipit
~ by Ian Montgomery
Newsletter – 1/12/16
There are two ways to acquire photos of additional species to add to the website: one is to go out and photograph something new; the other is to sit at your computer and wait for the taxonomists to provide them via splits. I mentioned, in passing, the Eurasian and Pacific Wrens last week. This week we have the Australian and New Zealand Pipits, a split I discovered a week ago when revising the Pipit and Wagtail family page and switching the sequence from BirdLife International to the IOC. That split stirred vague memories of pipits on Enderby Island in the Auckland Islands group south of New Zealand and I dug out some neglected photos of New Zealand Pipits from my archives and published them on the website. 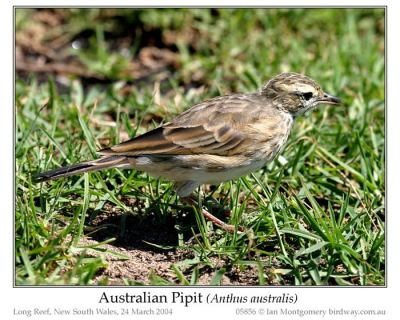 I could talk about their biology and show this photo of an adult feeding an insatiable fledgling, which was begging raucously for more food in another photo taken less than a second later. Instead, I decided this morning to Google the information contained in the sentence: “I took this photo of a New Zealand pipit (Anthus novaeseelandiae, J. F. Gmelin, 1789, Queen Charlotte Sound, South Island, New Zealand) on Enderby Island in November 2011”. Google led me on never-ending links of interesting information about the history of the Auckland Islands, voyages to Queen Charlotte Sound in the late 18th century, the work and publications of Johann Friedrich Gmelin and even to the novel Moby Dick* while I reminisced about the 2011 trip to the Sub-Antarctic Islands and dug out more photos of what we saw on Enderby Island. My task now is to distill all that stuff into a few sentences.

The Auckland islands are a rugged group of now uninhabited islands about 460km south of the South Island of New Zealand. Traces of Polynesian settlement dating back to the 13th century have been on Enderby Island, a small island about 5km long at the north eastern tip of the main island. They were rediscovered in 1806 by the whaling ship Ocean. Captain Bristow named the Islands after his friend the first Baron Auckland and Enderby Island after his boss Samuel Enderby, whose company owned the ship. The islands became an important sealing and whaling station, though by 1812 most of the New Zealand Sea Lions had been hunted and the focus switched to Campbell Island and Macquarie island farther south. There were several unsuccessful attempts at settlement later in the 19th century.

Most of the human activity on Enderby Island was at a sheltered bay called Sandy Cove on the south side of the island (below). That was where we landed and we hiked from there across to the north coast and then back along the coast in a clockwise direction, a distance of about 10km. Sandy Cove had lots of sea lions and Red-crowned Parakeets, strange to see on such a chilly windswept island.

I remember the last few kilometres along the south coast as being hard work wading through waist-deep tussocky grass but the wildlife along the way was wonderful and well worth the effort. In the tundra on the north coast there were New Zealand Snipe and Double-banded Plovers, while the cliffs on the north coast (below) had nesting Light-mantled Albatrosses. We watched their display flight  in the updrafts along the cliffs,a  veritable aerial ballet a deux, and could look down on other birds on their nests.

There were flightless Auckland Teal both along the coast and in pools of freshwater and we had to run the gauntlet of assertive male sea lions. We found that if you held your ground, they calmed down quite quickly and the following photo shows me making friends with one.

See? I’ve hardly mentioned pipits and, given the competition, it is surprising that I actually took any photos of them. Because various pipits all look much the same their taxonomy has long been, well, a mess.  There are – at the moment based on DNA studies – five similar species in Eurasian, Africa and Australasia that have in the past been treated as a single species. The other three are Richard’s pipit (central Asia), the African Pipit and the Paddyfield Pipit (south and southeast Asia). The first one to be named was a New Zealand specimen in 1789 by the German naturalist Johann Friedrich Gmelin, below, so according to the rules of taxonomic precedent that single species should have been novaeseelandiae.

Gmelin, 1748-1804, is best known for continuing to update and publish new volumes of the Systema Naturae after the death in 1778 of Linnaeus, the father of modern taxonomy. Here is the cover of the 1788 edition of Gmelin’s Volume I. Note that the classification is of the three natural kingdoms (Regna Tria Naturae) of animals, plants and minerals. This was in the days before anyone had to worry about evolution, and was all about managing the complexity of specimens of everything that were accumulating in vast numbers in museums, herbaria and other collections in Europe.

There were four levels of generalisation: classes, orders, genera and species. So the New Zealand Lark (as it was called then) belongs to the class Aves (birds), the order Passeres (sparrow-like), genus Alauda (larks) and species novae Zeelandiae (of Nova Seelandia). The system has proved remarkably robust. Class ‘Aves’ is still used for birds; ‘formes’ has been added to avian order names so Passeres survives as Passeriformes, Alauda is still used for true larks. The New Zealand Lark is now recognised as a pipit and has been moved to the Pipit genus Anthus. The main change to the classification structure is the addition of the Family level between order and genus. Pipits and Old World Wagtails are in the family Motacillidae and I was interested to find that the name Motacilla, the Wagtail genus, is to be found later in the same volume.

The volume makes interesting reading just at the level of habitats which hints at the enormity of the task faced by Linnaeus and Gmelin. The species above the New Zealand Lark is the ‘Cape Lark’ Alauda capensis from a specimen collected at the Cape of Good Hope (caput bonae spei). On just these two pages are species from Portugal, Argentina, Mongolia and Siberia and this on pages 798-799 of the volume on birds. I found another whole volume on worms and another on a subset of plants. Gmelin was primarily a botanist was published various books on plant and chemical poisons. On the zoological side he specialised in amphibians, reptiles and molluscs, so his publication of bird species was fairly incidental. Such was the all-encompassing nature of scholarship in those times.
Meanwhile, back at the website, progress continues. I’ve finished updating all the family pages and I’m now working through the 1,500 species and updating their pages to make them mobile-friendly. On a good day, I can do about 20 species. On the way, I’m adding new photos of previously prepared but not included photos and you can track this progress on the new Recent Additions page – the most recent photos are at the top of this page. This used to be a section on the Home Page which had become unmanageably large for mobiles and needed to be broken up. The Home Page now serves as a gateway to the rest of the website and to advise of updates. such as recent additions and the latest bird of the week.
I started by listing the two ways of getting new species for the website. I’m planning to do the other way next week, take a break from the website and go up to the Daintree River in search of nesting Black Bitterns. This is one of my bogey birds. I’ve seen them only flying away since the single occasion on which I saw one stationary at Chittaway Point on the Central Coast of New South Wales in the year 2000 before I took up serious bird photography with serious equipment. So this (scanned from film) is what I’m trying to improve on:

Are not five sparrows sold for two farthings, and not one of them is forgotten before God? But even the very hairs of your head are all numbered. Fear not therefore: ye are of more value than many sparrows. (or Pipits) (Luke 12:6-7 KJV) (emphasis mine)

All work and no play is hard for anyone. We will be praying that you find that elusive Black Bittern. Then you can tell us all about them next.

Here are a few articles that tell about Carolus Linnaeus: