Every year, all of the roadrunners would gather together and plan when they would have their special race. This was usually in the third month of the year. This race was incredibly important to all the roadrunners because it was the longest race they ran each year.

Harold usually wasn’t allowed to be in the race because he was so small. This year, however, he decided he was going to prove himself.

Harold ran as fast and as far as he could for two weeks. Every day he would go a little farther and a little faster. Finally, Harold was sure he was ready for the race, but he still didn’t know if he would win because he had seen the other roadrunners run, and they all had longer legs. 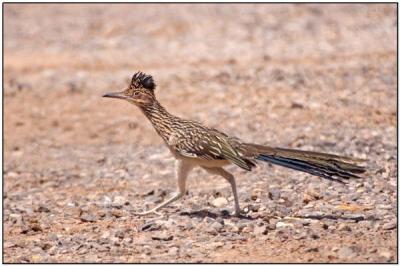 Harold started running as fast as he could. He was actually surprised to see that he was passing other roadrunners. One of the fastest roadrunners was still ahead of him. They were both reaching the halfway point of the race. All of the roadrunners on the sidelines were cheering them on.

Harold was steadily gaining on the other roadrunner. He was getting tired, but he wasn’t about to give up.

The finish line was approaching. In a few minutes Harold and the opposing roadrunner would cross the finish line.

From that year on, Harold entered the race every year, and he became one of the fastest roadrunners in the desert as he grew up.

Know ye not that they which run in a race run all, but one receiveth the prize? So run, that ye may obtain.(1 Corinthians 9:24 KJV)

Emma, that is another fantastic story. I was cheering for Harold all the way.

Sorry, but I couldn’t help but put that cartoon roadrunner in. That is one of the benefits of being the editor.

4 thoughts on “The Great Roadrunner Race by Emma Foster”