In this series the “B” birds began (in Part 1) with Bluebird and Bittern.

In this Part 2 the “B” birds will continue with Bobwhite Quail and Buteo Hawks.

Now for Bobwhite, i.e., the Bobwhite Quail — and the relevance of 1st Samuel 26:20 will be noted below.

Bobwhite is the name of a bird belonging to the New World quail family.  Other members of that quail family include the Yucatan (Black-throated) Bobwhite, the Crested Bobwhite, and the Spot-bellied Bobwhite.

The Bobwhite Quail (Colinus virginianus), a/k/a Northern Bobwhite and Virginia Quail, is a “New World quail”, meaning that it belongs to the group of pheasant/grouse/partridge/quail-like ground-fowl that habituate parts of North America.  In particular, the Northern Bobwhite is the only small native galliform (i.e., chicken-like ground-fowl) in the eastern region of North America.

The name “bobwhite” is supposed to represent this quail’s terse two-syllable whistle-call.  The Bobwhite’s call has a lower (and slower) first syllable, followed by a sharply projected (and quicker) “whhht”.  One variety of the Northern Bobwhite, known for habituating Virginia, was formerly called the “Virginia Partridge” (e.g., by ornithologist John James Audubon) – that local variety now being called Colinus virginianus virginianus (identified by Linnaeus in AD1758).

The ground-fowl lifestyle of this grouse-like ground-fowl is comparable to the Rock Partridge (Alectoris graeca) of which Israel’s king David once wrote:

Now therefore, let not my blood fall to the earth before the face of the Lord: for the king of Israel is come out to seek a flea, as when one doth hunt a partridge in the mountains.  (1st Samuel 26:20).

Now for the last category of “B” birds, the Buteo hawks.

Buteo hawks, as a category or raptors, are routinely contrasted with the Accipiter hawks (a/k/a “bird hawks”) that were described in the previous article on “A” birds (see “A” for Accipiter and Alcid: “A” Birds, Part 2, featuring Cooper’s hawk as the representative accipiter).  Hawk-like raptor birds include kites, falcons (including kestrels), harriers, eagles, Old World buzzards, vultures, osprey, and the exotic Secretary Bird.

The Red-Tailed Hawk (Buteo jamaicensis) is described by ornithologist Mary Taylor Gray as follows: “The most abundant, widespread, and familiar hawk of he West, the Red-tailed Hawk resides year-round in Colorado [and elsewhere].  Adult birds are readily identified by their rusty-red tail[s].  Dark bars along the undersides of the leading edge of the outstretched wings, near the shoulder, are also characteristic.  We often see redtails perched on power [utility] poles or soaring in the air on broad wings, carving slow, wide arcs.  The redtail’s dramatic call fits its image as a western icon.  The down-slurred scream—Keeeer!—is often heard as a background sound in movies and television shows.”  [Quoting Mary Taylor Gray, THE GUIDE TO COLORADO BIRDS (Englewood, Colorado: Westcliffe Publishers, 1998), page 66.]

Gray’s observation – that the Red-tailed Hawk is the common buteo of America’s Great West – is illustrated by my own birding experience, even 20 years ago! – having seen redtails during AD1996 in places as divergent as Montana (eastern side of Glacier National Park, July 2nd AD1996) and South Texas (Rockport-Fulton shoreline, Aransas Bay region, March 10th AD1996). 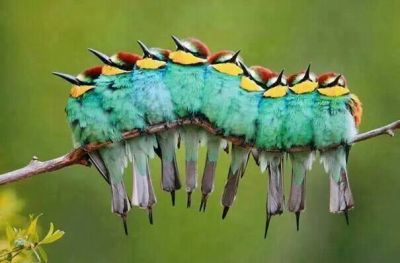 Of course, other “B” birds (such as the colorful and gregarious bee-eaters, shown above – photograph taken from Lee Dusing’s “Fellowship”,  exhibit our alphabet’s second letter – but this article is already long enough.  God willing, the next contribution to this alphabetic series will be some “C“ birds – such as Cardinal, Chicken, Coot, Cormorant, Chickadee, Caracara, Crane, Cuckoo, Curlew, and Corvid (including Crow)!  So stay tuned!    > JJSJ