Psalm 40:5
“Many, O LORD my God, [are] thy wonderful works [which] thou hast done, and thy thoughts [which are] to us-ward: they cannot be reckoned up in order unto thee: [if] I would declare and speak [of them], they are more than can be numbered.” 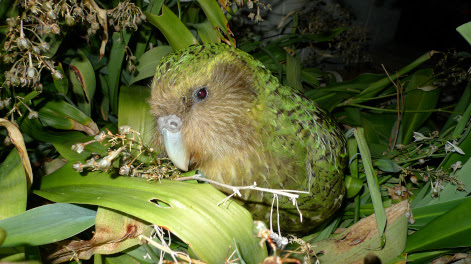 Though God created the entire living kingdom in only a few days, the variety and creativity of what He made seems nearly unlimited by our standards. One of the more unusual creatures He made was thought extinct until it was rediscovered in 1958.

The kakapo parrot lives in New Zealand. The most unusual parrot on Earth, it is one of only a few known parrots that prefers to sleep during the day and becomes active at night. Weighing in at five pounds, it is also the world’s heaviest parrot. It is, perhaps not surprisingly, the world’s only non-flying parrot.

The Creator’s unusual expression of inventive creativity in designing the kakapo did not end here. The mating habits of the kakapo are especially peculiar for birds. In mating season, the males gather in locations that are used year after year for mate selection. Female parrots come to these places to inspect the males to select a mate. However, in most un-bird-like fashion, the males provide absolutely no help building the nest or rearing the young.

The kakapo is remarkable because of its many strange traits, most of which would make it least fit for survival. In other words, not only is it an unusual creature, but its more unusual characteristics seem to put it at a disadvantage as far as evolution is concerned. So while evolution would not have made the kakapo, our inventive Creator did, perhaps as a witness against evolution.

Prayer: Dear Father in heaven, I thank You for the beauty and creativity You have placed into Your work of creation and for the blessings these gifts add to life. In Jesus’ Name. Amen.

Just thought you might enjoy reading about this uniquely created Avian Wonder from Our Creator.