Or how can you say to your brother, ‘Let me take the speck out of your eye,’ and behold, the log is in your own eye? (Matthew 7:4 NASB)

Photographers or Videographers used on this page from our sidebar, Photography, are:
Ian Montgomery’s Birdway

*
The logrunners (Orthonyx) are a clade of birds which comprises three species of passerine birds endemic to Australia and New Guinea. Some authorities consider the Australian family Cinclosomatidae to be part of the Orthonychidae. The three species use their stiffened tails to brace themselves when feeding.

The Australian Logrunner, Orthonyx temminckii, is from northeastern New South Wales and southeast Queensland, where it is very local in its distribution, and strictly terrestrial in its habits. The wings are barred with white, and the chin, throat and breast are in the male pure white, but of a bright reddish-orange in the female. The remiges are very short, rounded and much incurved, showing a bird of weak flight. The rectrices are very broad, the shafts stiff, and towards the tip divested of barbs. The population which is found locally in New Guinea is now generally considered a separate species, the Papuan Logrunner, Orthonyx novaeguineae. (Wikipedia with editing) 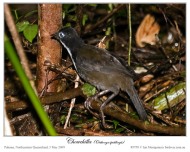