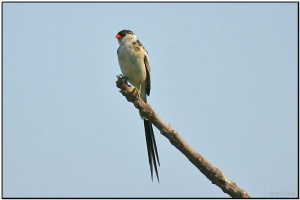 The person who gets money dishonestly is like a bird that hatches eggs it didn’t lay. In the prime of life he will lose his riches, and in the end he is nothing but a fool. (Jeremiah 17:11 GNB)

The indigobirds and whydahs, are a family, Viduidae, of small passerine birds native to Africa.

These are finch-like species which usually have black or indigo predominating in their plumage. The birds named “whydahs” have long or very long tails in the breeding male.

All are brood parasites, which lay their eggs in the nests of estrildid finch species; most indigobirds use fire-finches as hosts, whereas the paradise whydahs chose pytilias.

Unlike the cuckoo, the indigobirds and whydahs do not destroy the host’s eggs. Typically, they lay 2–4 eggs in with those already present. The eggs of both the host and the victim are white, although the indigobird’s are slightly larger.

Many of the indigo-plumaged species named “indigobirds” are very similar in appearance, with the males difficult to separate in the field, and the young and females near impossible. The best guide is often the estrildid finch with which they are associating, since each indigobird parasitises a different host species. For example, the Village Indigobird is usually found with Red-billed Fire-finches.

Indigobirds and whydahs imitate their host’s song, which the males learn in the nest. Although females do not sing, they also learn to recognise the song, and chose males with the same song, thus perpetuating the link between each species of indigobird and firefinch. (Wikipedia) 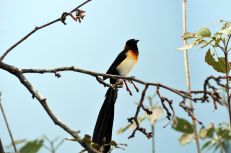 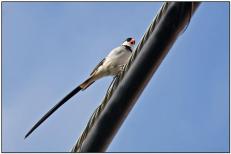 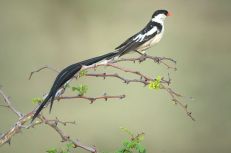 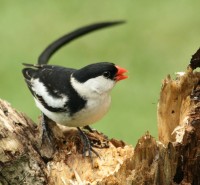