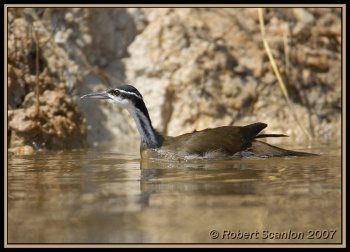 Mysterious Sungrebe… ~ by a j mithra

Sungrebe, common name for a tropical, mainly aquatic bird of the family Heliornithidae. Sungrebes, also called finfoots, are remarkable for their colorful, puffy-toed, webbed feet, which may serve as lures for fish and other aquatic animals.

Once widely distributed, they (Heliornithidae) are now limited to three species.

The largest of these is the Masked Finfoot (Heliopais personata) measuring up to 20 in. (51 cm) in length, and found from Bengal to Malaya and Sumatra. Its body is olive-brown above, with a black head and throat, a yellow bill, and bright green legs with white stripes.

At 16 in. (41 cm), the African Finfoot (Podica senegalis) is dark brown with black and white spots above, a white belly, and bright red feet and legs. It is thought to be more of a climber than the other species.

Only a third to a quarter as bulky as the Asian Sungrebe and measuring less than 12 in. (30 cm) in length is the Sungrebe (Heliornis fulica) of South and Central America. its plumage is colored similarly to that of the Asian sun grebe, but it is scarlet-billed with yellow, black-striped legs.

All three species are marked by a white band running from eye to neck. Sun grebes are classified in the phylum Chordata subphylum Vertebrata, class Aves, order Gruiformes, family Heliornithidae. It is mainly brown, with a long neck and blackish tail, and a long red bill. The crown and neck are strikingly patterned with black and white stripe, and the feet are black and yellow.

The sexes differ in the colour of the cheeks, buff in the female and white for the male. Sungrebes are shy birds rarely seen by people. They usually swim close to cover and may hide either in vegetation or in the water, with their bodies underwater and their heads lowered, when they are disturbed.

What do we do when we are disturbed in life?

The name of the LORD is a strong tower: the righteous runneth into it, and is safe. (Psalm 18:10)

They are not just good swimmers but capable walkers and climbers too. Sungrebes tend to roost, or spend the night, in trees or bushes. This bird is unique that it is able to do everything; fly, swim, walk and climb..

We are unique too, for, God has created us in His image..

So, lets stop talking low of ourselves and start praising God for His purpose in our lives..

I can do all things through Christ which strengtheneth me. (Philippians 4:13)

Sungrebes may be solitary, that is, may live by themselves, or are found in pairs, generally male and female breeding partners, or family groups. Sungrebes are permanently territorial, meaning they defend their territories from other individuals of the same species during the breeding season as well as the nonbreeding season.

Although all three sungrebe species have distinctive calls, these are not often heard. The African Finfoot makes a loud booming sound during breeding. The Masked Finfoot has a bubbling call. The Sungrebe has a “eeyoo” call that it makes to warn other sungrebes away from its territory.

Though these birds have distinctive calls, they are not often heard..

Our grumbling and complaining is heard ever so often, which makes it easier for satan to locate us easily..

I am the LORD thy God, which brought thee out of the land of Egypt: open thy mouth wide, and I will fill it. (Psalm 81:10)

God did not ask us to open our mouth to complain and grumble, but, to sing praises…

Death and life are in the power of the tongue: and they that love it shall eat the fruit thereof. (Proverbs 18:21)

Sungrebes feed primarily on insects, particularly midgets, mayflies, and dragonflies. They may also eat beetles, grasshoppers, and flies, as well as some mollusks, crustaceans, worms, millipedes, and spiders. Occasionally they can eat larger animals such as frogs, tadpoles, or small fish. Sungrebes are also known to eat a small amount of plant material, such as seeds and leaves. Most of their food is found on the water surface, but Sungrebes also forage in overhanging vegetation or along banks.

It nests from August to April building a bowl shaped nest from reeds, course grass and shiny leaves which it places on a sloping branch overhanging the water often in driftwood caught in branches. The eggs are pale buffy green streaked with brown and purple and 1 to 2 are laid and incubated for about eleven days. The chicks hatch naked, blind, and defenseless.

When our dwelling place is near the Living waters, we have providence in abundance and protection and deliverance..

Where are we planted?

Blessed is the man that walketh not in the counsel of the ungodly, nor standeth in the way of sinners, nor sitteth in the seat of the scornful.

But his delight is in the law of the LORD; and in his law doth he meditate day and night.

And he shall be like a tree planted by the rivers of water, that bringeth forth his fruit in his season; his leaf also shall not wither; and whatsoever he doeth shall prosper. (Psalm 1:1-3)

The Sungrebe is already very strange in having a very short incubation period (10-11 days, matching some small passerines) but has an astonishing behavior entirely unique in the bird world: the male Sungrebe is able to transport these helpless offspring, even in flight! The male has a shallow pocket under each wing into which the two young can fit. The pocket is formed by a pleat of skin, and made more secure by the feathers on the side of the body just below. The heads of the chicks could be seen from below as the bird flew. This adaptation is unique among birds: in no other species is there any mechanism whereby altricial young can be transported.

As an eagle stirreth up her nest, fluttereth over her young, spreadeth abroad her wings, taketh them, beareth them on her wings: (Deuteronomy 32:11)

Of course, the precocial young of some swans and grebes may hitch rides on their swimming parents’ backs, and a male jaçana can transport his chicks about holding them between his wings and body, but neither of these cases applies when the adults are in flight….

The transport system of the Sungrebe raises numerous further questions. How do the chicks get into the pocket? Are they put in by the male? Does he feed them in there? Do they stay inside, or get in and out? Why does the female not have similar pockets? …

Yes, the Sungrebe and the Finfoots are mystery birds indeed…

Our God is not mysterious but His ways are…

Our God is able…

Great in counsel, and mighty in work: for thine eyes are open upon all the ways of the sons of men: to give every one according to his ways, and according to the fruit of his doings: (Jeremiah 32:19)

One thought on “Mysterious Sungrebe…”