We wrote about Peacocks before in Birds of the Bible – Peacocks, dated April of 2008. This is about the Pied Peacock which is from the jungles of India and Sri Lanka. When Solomon sent for them to be delivered, they were brought by a joint navy of Hiram and the navy of Tharshish.

I received a notice by “bellamoonnature” of a video he made of the Pied Peacock. Decided to share it and bring the peacock article a little more up to date. It is about a Pied Peacock. For more information on how that comes about see India Blue Pied. It is a mutation, but still it is a neat looking Peacock or Peafowl.

Here is his video:

I love the little immature male trying to practice his tail display. He has a way to go before his tail reaches the beauty of the mature male. This peacocks beautiful display goes right along with God’s question to Job.

Gavest thou the goodly wings unto the peacocks? or wings and feathers unto the ostrich? (Job 39:13 KJV)

The Polyplectron genus is the peacock-pheasants. “The peacock-pheasants are a bird genus, Polyplectron, of the family Phasianidae, consisting of eight species. They are colored inconspicuously, relying on heavily on crypsis to avoid detection. When threatened, peacock-pheasants will alter their shapes utilising specialised plumage that when expanded reveals numerous iridescent orbs. The birds also vibrate their plume quills further accentuating their aposematism (Warning colourataton or signal). Peacock-pheasants exhibit well developed metatarsal spurs. Older individuals may have multiple spurs on each leg. These kicking thorns are used in self-defense.” (Wikipedia)

“Peafowl are two Asiatic species of flying birds in the genus Pavo of the pheasant family, Phasianidae, best known for the male’s extravagant eye-spotted tail, which it displays as part of courtship. The male is called a peacock, the female a peahen, and the offspring peachicks. The adult female peafowl is grey and/or brown. Peachicks can be between yellow and a tawny colour with darker brown patches. The male (peacock) Indian Peafowl has iridescent blue-green or green coloured plumage.

The peacock tail (“train”) is not the tail quill feathers but the highly elongated upper tail coverts. The “eyes” are best seen when the peacock fans its tail. Like a cupped hand behind the ear the erect tail-fan of the male helps direct sound to the ears. Both species have a crest atop the head.

The female (peahen) Indian Peafowl has a mixture of dull green, brown, and grey in her plumage. She lacks the long upper tail coverts of the male but has a crest. The female can also display her plumage to ward off female competition or signal danger to her young.

As with many birds, vibrant plumage colours are not primarily pigments, but optical interference Bragg reflections, based on regular, periodic nanostructures of the barbules (fiber-like components) of the feathers. Slight changes to the spacing result in different colours. Brown feathers are a mixture of red and blue: one colour is created by the periodic structure, and the other is a created by a Fabry–Pérot interference peak from reflections from the outer and inner boundaries. Such interference-based structural colour is important for the peacock’s iridescent hues that change and shimmer with viewing angle, since unlike pigments, interference effects depend on light angle. Colour mutations exist through selective breeding, such as the leucistic White Peafowl and the Black-Shouldered Peafowl.”(Wikipedia) 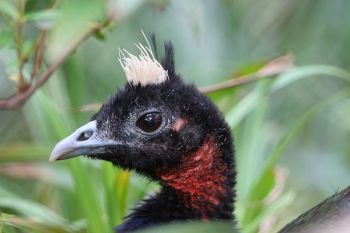 “The Congo Peafowl (Afropavo congensis) is a species of peafowl. It is the only member of the monotypic genus Afropavo. The male is a large bird of up to 70 cm (28 in) in length. Its feathers are deep blue with a metallic green and violet tinge. It has bare red neck skin, grey feet, and a black tail with fourteen feathers. Its head is adorned with vertical white elongated hair-like feathers on its crown. The female is generally a chestnut brown bird with a black abdomen, metallic green back, and a short chestnut brown crest. Both sexes resemble immature Asian Peafowl, with early stuffed birds being erroneously classified as such before they were officially discovered as a unique species. It inhabits and is endemic to lowland rainforests of Congo River Basin in the central part of the Democratic Republic of the Congo.

The diet consists mainly of fruits and invertebrates. The male has a similar display to other peacocks, fanning its tail in this case, while other peacocks fan their upper tail coverts. The male Congo Peafowl is monogamous, though information from the wild is needed. Very little is known about this species.” (Wikipedia)

Birds of the Bible – Peacocks

One thought on “Birds of the Bible – Pied Peacock and Allies”