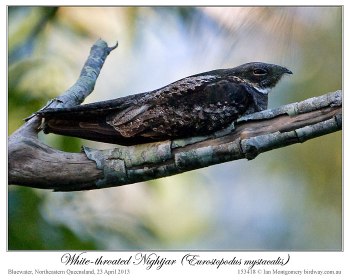 On the recent inland trip I searched without success in various places for the Spotted Nightjar, a dry country species that roosts in spinifex and open woodland. Sometimes it is to be seen on gravel roads at night, but it seems rather shy and it’s still on my wanted-to-photograph list. I’m back home in Bluewater near Townsville with my sister Gillian, also interested in birds and on a visit from Ireland, so last Tuesday we drove up to the highland mixed forest, part sclerophyll part rainforest, on the range at the end of Forestry Road where I live. She spotted the bird in the first photo which we had disturbed walking along a forest track.

This is a White-throated Nightjar, also on my wanted list as the only one I had photographed before was the one in the second photo, taken 5 years ago in the vestibule of Reef HQ, the aquarium in Townsville in the less than ideal natural surroundings of the roof supports.

The sharp-eyed among you may have noticed that both photos were taken in April. This is no coincidence as this species is mainly seen here on migration and there are other reports of it turning up in strange places here, including a disused railway carriage that was used as travel accommodation for several years. Incidentally, its specific name mystacalis means ‘moustached’.

A much commoner species here is the Large-tailed Nightjar, often heard at night around Townsville in gallery forest, rainforest and mangroves. It has an unmistakable, very persistent ‘chop’ ‘chop’ call that gives it its colloquial name of Carpenter Bird or Axe Bird, and I often here it near my house, particular on moonlit nights.

On the day we saw the White-throated Nightjar I had been hoping that we’d see Large-tailed Nightjars on Forestry Road when we returned home at dusk, but the White-throated got in first. So we were delighted to see 3 Large-tailed as well on the way home, including one that obligingly flew up into a tree beside the road and called to us as we illuminated it with a spotlight. I had said to Gillian a few days before that this was one of the few places I knew where you could easily see two species of Stone-curlew/Thicknee in one day after we had seen a pair of Beach Stone-curlews when we went for fish and chips at nearby Balgal Beach and then found two Bush Stone-Curlews in the garden when we returned home. I could perhaps have said the same about Nightjars. You could also say something about the irony of travelling to distant places when there are so many things to be seen in one own back yard.

How true it is that sometimes we find great treasure right in our own back yard. I am so thankful, Ian, that you share so many of your adventures with us. And, it is nice to share those adventures with your sister.

We have been able to see three members of the Caprimulgidae – Nightjars Family; the Common Nighthawk, Whip-poor-will and the Chuck-will’s-widow.