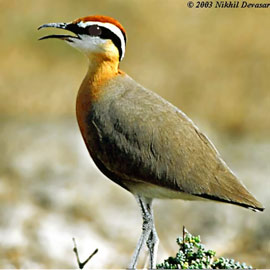 Who teacheth us more than the beasts of the earth, and maketh us wiser than the fowls of heaven? (Job 35:11 KJV)

*
Glareolidae is a family of birds in the wader suborder Charadri. It contains two distinct groups, the pratincoles and the coursers. The coursers include the atypical Egyptian Plover, Pluvianus aegyptius, which has sometimes been placed in its own family. The family contains 17 species in five genera.

The feature that defines the family from the rest of the order is the bill, which is arched and has the nostrils at the base. The pratincoles have short legs, long pointed wings and long forked tails. They have a buoyant flight that allows them the unusual (for the order) hunting technique of taking their insect prey on the wing like swallows. The wings also allow for long migrations in some species. The coursers have long legs, which are used to run (giving the group its name. The wings are shorter and have a more sustained flight than that of the pratincoles.

The pratincoles and coursers have an Old World distribution, occurring in southern Europe, Asia, Africa (including Madagascar), and Australia. The family is thought to have evolved in Africa, which is where the family achieves its greatest diversity, although fossils of an extinct pratincole have been found in Miocene deposits in France. (Wikipedia with editing) 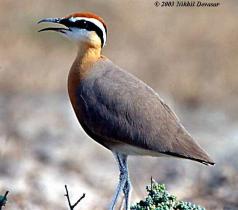