Then certain philosophers of the Epicureans, and of the Stoicks, encountered him. And some said, What will this babbler say? other some, He seemeth to be a setter forth of strange gods: because he preached unto them Jesus, and the resurrection. (Acts 17:18 KJV)

The Rail-babbler or Malaysian Rail-babbler (Eupetes macrocerus) is a strange, rail-like, brown and pied inhabitant of the floor of primary forest in the Malay Peninsula and Sumatra (the nominate subspecies macrocerus), as well as Borneo (ssp. borneensis), distantly related to African crow-like birds. Its population has greatly decreased because much of the lowland primary forest has been cut, and secondary forests usually have too dense a bottom vegetation or do not offer enough shade to be favourable for the species. However, it is locally still common in logged forest or on hill-forest on slopes, and probably not in immediate danger of extinction. The species is poorly known and rarely seen, in no small part due to its shyness. (Wikipedia) 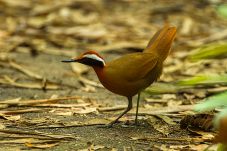