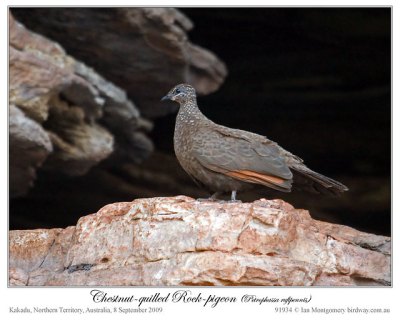 This is really the bird of last week as this is the first opportunity I’ve had for internet access for 12 days. We are in Kununurra now in far northeastern Western Australia, having arrived here yesterday from the Northern Territory. We spent most of the time in the Kakadu area, followed by a couple of days in Pine Creek between Darwin and Katherine.

The Chestnut-quilled Rock-Pigeon was on my primary target list – birds that I hadn’t seen before – so I was pleased to find this single bird at Bardedjildidji, a sandstone escarpment in eastern Kakadu near Ubirr on the border with Arhnem Land. It obligingly flew past us before landing in this small cave not too far away and not too inaccessible. You can see the chestnut on the partially open wing.

There are two species of Rock-Pigeon – this one and the closely related White-quilled Rock-Pigeon. Both have limited distributions in northern Australia, the Chestnut-quilled in the Kakadu area and the White-quilled farther west in the Top end of the Northern Territory and across the border into Western Australia. Both are found in very rugged sandstone country where they take refuge in crevices and caves.

The White-quilled is one of the reasons for coming as far as Kununurra and we are going to look for this species later this afternoon when it cools down a bit. It has been very hot for almost our entire stay, reaching 37-38ºC almost every day. So, birding has been hard work a lot of the time.

I’ll send another catch-up bird of the week in a day or two while I have the opportunity here in Kununurra.

You who dwell in Moab, Leave the cities and dwell in the rock, And be like the dove which makes her nest In the sides of the cave’s mouth. (Jeremiah 48:28 NKJV)