Three-wattled Bellbird – The Noise Maker  by a j mithra 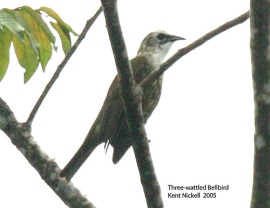 The Three-wattled Bellbird lives between eastern Honduras and western Panama. In Costa Rica it lives on both slopes of the country..

It breeds in the cloud forests and in the foothill and highland moist forest at 1,200-2,100 m, and occasionally down to 750 m. In the non-breeding season, birds undertake complex migrations ranging up to 3,000 m (in Costa Rica), and then descending to the foothills and lowlands on both the Pacific and Caribbean slopes…

There is protection, anointing and guidance under the Pillar of the Cloud…
These birds seem to know the secret of living a protected life under the clouds..

The Bible says that we are the temple of the Living God, but, can we say that, we dwell under the Pillar of the Cloud?

During the days of Moses, the Pillar of the Cloud hovered above the tabernacle, from where Moses took orders from the Lord…
From where do we take orders? Man or God?

And it came to pass, as Moses entered into the tabernacle, the cloudy pillar descended, and stood at the door of the tabernacle, and the LORD talked with Moses. (Exodus 33:9)

Maybe that is the reason that, we are not able to hear the voice of the Lord…

The Three-Wattled Bellbird swallows the fruits of trees, particularly those in the Lauraceae family, of which the avocado is a member. Avocados, known as Butter-fruit in India, have the highest protein content of any fruit. Avocados contain more potassium than bananas. One avocado contains 81 mcg of lutein, an important nutrient for healthy eyes. Leaf and seed extracts have been used for a variety of medical application, including treatment of diarrhea and dysentery and as an antibiotic.

What kind of food do we eat?
These birds not only eat healthy food, but they eat medicinal food too..
People spend more money on medicine rather than on food..

Is it because, now a days, people don’t eat to live, but they live to eat..

And put a knife to thy throat, if thou be a man given to appetite. (Proverbs 23:2)

At close range, the vocalization of many in Costa Rica is heard as a complex three-part song, is thought to be among the loudest bird calls on Earth, audible to humans from over 0.5 mi (0.80 km) away. The song is different in Nicaragua and in also Panama, and these songs also include an extremely loud, but less bell-like, note.

Based on limited spectral analysis, researchers believe that the Bell-bird makes its unusual anvil-like sound by singing up to three notes simultaneously. This is a trick which takes the young birds a while to perfect. This one seems to be producing pitches of roughly 1280, 1365, and 1450 Hz, approximately E6, F6, and F-sharp6 in the musical scale. These three notes, each a semi-tone apart, produce a very rough, dissonant “bonk” giving the bird its name.

A link to the Three-wattled Bellbird. A male is displaying and you can hear his call, by Max Roth.

The three-wattled bellbird, which inhabits the cloud forests, is rarely seen in the mist-shrouded treetops, though the male’s eerie call, described as a “ventriloqual bonk!’ haunts the rainforest… as long as the sun is shining.

The purpose for which God created us is to worship and worship alone…
But, are we worshipping the Lord at all times or just in a Sunday morning service?

You may not have a good voice but still your noise can frighten the devil..
You know? God loves your NOISE and not your VOICE…

These birds sing as long as the sun is shining..

We, the church too can sing only as long as the Sun of Righteousness shines on us..
Darkness is fast descending, let us keep singing , for the hour of the Lord has come..
If we don’t sing here, how can we sing in heaven?
After all, only practice makes us perfect…

The dead praise not the LORD, neither any that go down into silence. (Psalm 115:17)

Please visit us at:  Crosstree

The four Bellbirds are in the Cotingidae Family of the Passerifromes Order. The Cotinga family has Bellbirds (4), Cotingas (25), Plantcutter (3), Berryeater (2), Fruiteater (12), Cock-of-the-rock (2), Phia (9), Fruitcrow (4), Capuchinbird (1), and Umbrellabird (3). They all seem to have interesting names.