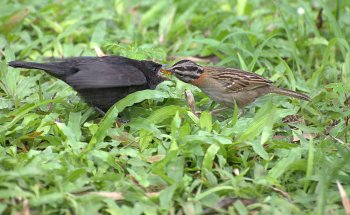 Brood parasites are organisms that use the strategy of brood parasitism, found among birds, fish or insects, involving the manipulation and use of host individuals either of the same or different species to raise the young of the brood-parasite. This relieves the parasitic parent from the investment of rearing young or building nests, enabling them to spend more time foraging, producing offspring etc. Additionally, the risk of egg loss to raiders such as raccoons is mitigated, by having distributed the eggs amongst a number of different nests. As this behavior is damaging to the host, it will often result conflict between parasite and host. 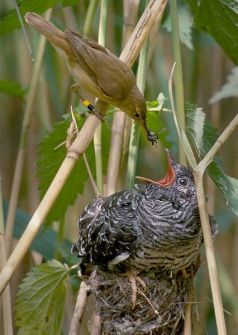 Common Cuckoo (Cuculus canorus) being raised by a Reed Warbler©WikiC

Interspecific brood-parasites include the Old World Cuckoos in Eurasia and Australia, Cowbirds and Black-headed Ducks in the Americas, and Indigobirds, Whydahs, and the Honeyguides in Africa.

Among specialist avian brood parasites, mimetic eggs are a nearly universal adaptation. There is even some evidence that the generalist Brown-headed Cowbird may have developed an egg coloration mimicking a number of their hosts.

Most avian brood parasites will remove a host egg when they lay one of their own in a nest. Depending upon the species, this can happen either in the same visit to the host nest or in a separate visit before or after the parasitism. This both prevents the host species from realizing their nest has been parasitized and reduces competition for the parasitic nestling once it hatches.

Most avian brood parasites have very short egg incubation periods and rapid nestling growth. This gives the parasitic nestling a head start on growth over its nestmates, allowing it to outcompete them. In cases where the host nestlings are significantly smaller than the parasite nestling, the host nestlings will often starve to death. Some brood parasites will eliminate all their nestmates shortly after hatching, either by ejecting them from the nest or killing them with sharp mandible hooks which fall off after a few days.

Whoa! This is NOT NICE! What is so amazing is that if not detected in time, many times the birds do find the intruding egg and toss it out, but most times, the unsuspecting parents raise this young bird as if it were it’s own.

What can we, as observers of this behavior, learn from the birds? I want to consider the host birds who have quite a challenge to face. They either fix the problem or they could be very “overwhelmed” with situation at hand.

My first thoughts were from a physical need. When faced with a health problem, we pray and visit the doctors and try to remedy the situation. Sometimes the ailment is not cured and we may be faced with an “overwhelming” need. Do we accept whatever the outcome and:

Not that I speak in regard to need, for I have learned in whatever state I am, to be content: (Philippians 4:11 NKJV)

Another lesson that could by learned by observing this “overwhelming” task might be in sharing the load. Often in churches, the ones who are willing to serve the Lord become very involved because of others not volunteering or helping. They keep taking on more responsibilities, not complaining, but in time they could become “overwhelmed.” We should find a way to:

Bear one another’s burdens, and so fulfill the law of Christ. (Galatians 6:2 NKJV)

Though one may be overpowered by another, two can withstand him. And a threefold cord is not quickly broken. (Ecclesiastes 4:12 NKJV) 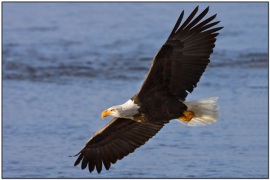 The host birds accept the situation and do the best they can to raise the young bird. How do they do that? One worm at a time! When we become “overwhelmed,” that is just what we need do. No! Not by catching worms, but by taking one step at a time and harkening to the following promises:

And let us not be weary in well doing: for in due season we shall reap, if we faint not. (Galatians 6:9 KJV)

I can do all things through Christ which strengtheneth me.
(Philippians 4:13 KJV)

But they that wait upon the LORD shall renew their strength; they shall mount up with wings as eagles; they shall run, and not be weary; and they shall walk, and not faint. (Isaiah 40:31 KJV)

(Some information from Wikipedia)
*

2 thoughts on “Learning from the Birds – Overwhelmed”