I think everybody, birders and non-birders, likes Toucans. They’re one of the iconic, almost cartoonish, animals that were introduced to as young children and I remember Toucans (and Gnus) featuring in posters for Guinness stout in Ireland in the 1950s. Their unbelievably large and colourful bills are so outlandish that it is a delightful shock to come across them in the flesh, particularly in the wild.

The Villa Lapas hotel where I stayed in the Pacific lowlands of Costa Rica had a rainforest canopy trail in its grounds and I checked it out one thundery and gloomy afternoon. The rain held off for most of the trek but, for the most part, the birds didn’t like the weather any more than I did and the light and the dense foliage made it hard to see much less photograph anything. However, repeated raucous calls led me to a pair of Chestnut-mandibled Toucans perched high in an unusually open tree. They proved to be very shy, fell silent as soon as I appeared and flew off into the forest giving me time to take only a few photos. With a length to 61cm/24in, the Chestnut-mandibled is the largest Toucan in Costa Rica. Its range includes most of Central America and Northern South America from Honduras to Ecuador. 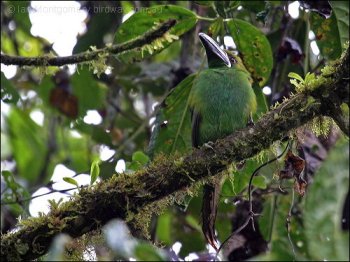 Toucans use their large bills to collect fruit, but will also feed on nestlings. The structure of the bill is a honeycomb, so it quite light and not particularly strong. Its function has attracted a lot of speculation from reaching fruit, signalling and defence and the latest theory is that it is used as heat exchanger for cooling. The colours vary widely from species to species, supporting its use for species identification but they don’t vary either between the sexes or seasonally. There are about a dozen species of large toucan (genus Ramphastos) and the toucan family (Ramphastidae) includes smaller ones such as Mountain-Toucans (Andigena), Toucanets (Selenidera) and Araçaris (Peteroglossus). All of these are restricted to Central and South America but the related Barbets occur also in Africa and Eurasia. If you are interested in examples of these, have a look at: http://www.birdway.com.au/ramphastidae/index.htm.

Recent milestone on the website are totals of 5,600 photos and 1,300 species. Additions to the website since last week include more photos of American waders such as:

Wow! What a milestone. Way to go Ian. Hope he doesn’t mind, but I inserted one of his photos of a toucanet. Check out Ian’s link above of the Ramphastidae Family.

We were able to meet and pet “Gracie” at the National Aviary in Pittsburgh, PA this summer. She is also a Chestnut-mandibled Toucan. Her beak as you can see is showing her age. She is retired now and is well cared for. Like Ian said, “I think everybody, birders and non-birders, likes Toucans.” I definitely think they are very neat.

Its leaves were beautiful and its fruit abundant, and in it was food for all. The beasts of the field found shade under it, and the birds of the heavens lived in its branches, and all flesh was fed from it. (Daniel 4:12 ESV)

The Toucans, as Ian said, are found in the Ramphastidae Family. At present, there are 47 species in the family. They are part of the Piciformes Order which contains the Woodpeckers and their allies.