“The Demoiselle Crane (Anthropoides virgo), is a species of crane that breeds in Central Asia and winters in India, with a few found in Cyprus and eastern Turkey as well. The crane annually migrates to Africa and South Asia in winter. The bird is symbolically significant in the culture of North India and Pakistan, where it is known as the koonj.

*
Demoiselle Cranes have to take one of the toughest migrations in the world. In late August through September, they gather in flocks of up to 400 individuals and prepare for their flight to their winter range. During their migratory flight south, Demoiselles fly like all cranes, with their head and neck straight forward and their feet and legs straight behind, reaching altitudes of 16,000-26,000 feet (4,875-7,925 m). Along their arduous journey they have to cross the Himalayan mountains to get to their over-wintering grounds in India, many die from fatigue, hunger and predation from birds such as eagles. Simpler, lower routes are possible, such as crossing the range via the Khyber Pass. However, their presently preferred route has been hard-wired by countless cycles of migration (placed in them by their creator). At their wintering grounds, Demoiselles have been observed flocking with Common Cranes, their combined totals reaching up to 20,000 individuals. Demoiselles maintain separate social groups within the larger flock. In March and April, they begin their long spring journey back to their northern nesting grounds.

In Khichan, Rajasthan in India, villagers feed the Cranes on their migration and these large congregations have become an annual spectacle.

Watch this amazing video of them crossing the Himalayan mountains by AZPanorama:

When the Lord created the Crane kind, they were programmed for future variations like this Demoiselle Crane. They act like many other birds that pretend they are injured. This helps them lead the preying bird or animal away to protect their young. The Demoiselles also are the smallest cranes.  They have shorter toes and bills than other cranes which allows them to travel on ground that is hard and dry. The shorter bills aid in their choice of food. Their survival is being provided by their Designer and Creator.

Geneva Bible Translation Notes – I was so oppressed with sorrow, that I was not able to utter my words, but only to groan and sigh.

CC Commentary – 14.) – As a crane, or a swallow. Hezekiah cannot satisfy himself in explaining the severity of his anguish. He now says that he was reduced so low that he could not utter an articulate voice, but muttered some confused sound, like persons who are almost at the point of death. Hence it is evident that his distress was excruciating; for the severity of the pain took away his voice, and his voice, he says, stuck in his throat; nothing was heard but indistinct groans.
Such is the import of these metaphors of “the crane and the swallow,” which the Prophet employs. Still it is certain that this indistinct sound of the voice is nevertheless heard by God; though all our senses are oppressed by pain, and our throat is choked by grief, still God beholds our hearts and listens to godly sighs, which will be even more powerful than plain and direct words, provided that the Spirit is present, who produces in us those “groanings that cannot be uttered,” of which Paul speaks. (Rom_8:26.) There is no believer who does not feel that in prayer, when his heart is oppressed by any heavy sorrow, he either stammers or is almost dumb.

Bible Knowledge Commentary – b. Hezekiah’s song of thanksgiving (Isa_38:9-20)
(1) Hezekiah’s statement about his condition.
After he was healed Hezekiah wrote a song to express his thanks to God. His illness came, he said, in the prime of his life. Death was referred to figuratively as having gates through which a person entered (cf. Job_38:17; Psa_9:13; Psa_107:18). His statement that in death he would not… see the Lord does not mean he had no hope of heaven. It probably means that he would no longer have the benefit of enjoying God’s blessings in this life. He would be without friends (Isa_38:11) as his house (his body) was dismantled. By death he would be cut… off like a cloth being cut from a weaver’s loom. He had hoped he would get well (Isa_38:13) but he got worse (Isa_38:13-14). His illness was as if God were a lion breaking all his bones, a figure of speech depicting his deep inner anguish. In some way his cries of pain were like the sound of a bird and his mourning like the doleful sound of a dove (cf. Isa_59:11; Nah_2:7). Hezekiah realized that this experience should humble him because God had brought on this illness. 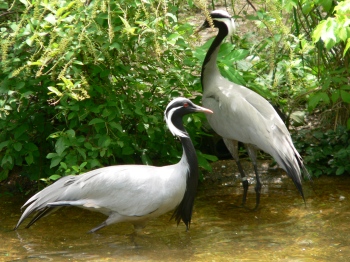 Bible Believer’s Commentary – 8:1-7 – …Unlike those who fall and rise again, who sin and repent, Judah refused to return to Jehovah. As far as the law was concerned, the people compared unfavorably with the stork, the turtledove, the swift, and the swallow, which are obedient to their appointed laws of migration.

CC Commentary – Here again Jeremiah condemns the shameful insensibility of the people, — that they had less wisdom than birds, not endued with reason and understanding. He then says, that the Jews were more foolish than cranes, swallows, and storks. He no doubt deeply wounded the feelings of the people by so severe a reproof; but it was necessary thus sharply to reprehend the despisers of God; for it appears evident by these words, that they were become exceedingly hardened in their vices. No wonder, then, that the Prophet declares that they were more silly than cranes and swallows.

Kelly Commentary – Moreover, the prophet was to remonstrate with the people of Jerusalem on their perpetual and unrepentant backsliding (Ver. 4-6), more heedless than familiar birds, great or small, which attend to their fit times, yet with all assumption of wisdom. (Ver. 7, 8.) But what wisdom is in those who reject the word of the Lord? Their covetousness and perfidious neglect of the true interests of Israel must meet with due retribution at His hands.

Geneva Bible Translation Notes – He accuses them in that they are more ignorant of God’s judgments, than these birds are of their appointed seasons to discern the cold and heat.

Adam Clarke’s Commentary – The stork in the heaven – The birds of passage know the times of their going and return, and punctually observe them; they obey the dictates of nature, but my people do not obey my law.

P.S. I have to share an incident that happened while I was teaching 4th grade in a Christian School. On a Friday, I had forgotten to write up the weekly Bible Quiz so I quickly put 5 Essay Questions on the board. We had been discussing King Hezekiah that week so one of the questions was “Tell me about King Hezekiah.” Well, while grading the papers, I almost fell out of my chair laughing. One of my students had told all about how he had been sick and that the Lord had – (here’s the verse – “Isaiah 38:8 Behold, I will bring again the shadow of the degrees, which is gone down in the sun dial of Ahaz, ten degrees backward. So the sun returned ten degrees, by which degrees it was gone down.”). My student went on to say that because the sun dial went back an hour, “that is why we now have Daylight Savings time.” Oh, the pleasures of teaching!

The Crane Family, Gruidaes, has 15 species. They are one of 6 families in the Gruiformes (Cranes, Rails, Coots and allies) Order.

Birds of the Bible – Cranes

Birds of the Bible – Cranes I

Birds of the Bible – Cranes II