Adam Clarke’s Commentary: “The swan – תנשמת tinshemeth. The Septuagint translate the word by πορφυριωνα, the porphyrion, purple or scarlet bird. Could we depend on this translation, we might suppose the flamingo or some such bird to be intended. Some suppose the goose to be meant, but this is by no means likely, as it cannot be classed either among ravenous or unclean fowls. Bochart thinks the owl is meant.”

Companion Bible Notes: “swan, not our swan: it is variously rendered “ibis”, “heron”, and “pelican”.

Gill: “Leviticus 11:18
And the swan,…. This is a bird well known to us, but it is a question whether it is intended by the word here used; for though it is so rendered in the Vulgate Latin, it is differently rendered by many others: the Targums of Jonathan and Jerusalem call it “otia”, which seems to be the same with the “otus” of Aristotle (n), who says it is like an owl, having a tuft of feathers about its ears (from whence it has its name); and some call it “nycticorax”, or the owl; and here, by Bochart (o), and others, the owl called “noctua” is thought to be meant; and with which agrees the account some Jewish writers give of it, as Aben Ezra and Baal Hatturim, who say it is a bird, which every one that sees is astonished at it, as other birds are at the owl, are frightened at the sight of it, and stupefied. But as the same word is used Lev_11:30 among the creeping things, for a mole, what Jarchi observes is worthy of consideration, that this is “calve (chauve) souris” (the French word for a bat), and is like unto a mouse, and flies in the night; and that which is spoken of among the creeping things is like unto it, which hath no eyes, and they call it “talpa”, a mole. The Septuagint version renders it by “porphyrion”, the redshank; and so Ainsworth; and is thought to be called by the Hebrew name in the text, from the blowing of its breath in drinking; for it drinks biting, as Aristotle says (p):”

Jamieson Fausset Brown: the swan — found in great numbers in all the countries of the Levant. It frequents marshy places – the vicinity of rivers and lakes. It was held sacred by the Egyptians, and kept tame within the precincts of heathen temples. It was probably on this account chiefly that its use as food was prohibited. Michaelis considers it the goose.
McGee:
Leviticus 11:13-19

CLEAN AND UNCLEAN FLYING CREATURES (IN THE AIR)
On the birds there are no visible markers like there are on the fish and the animals. But they seem to have in common that they are all unclean feeders. For the most part, they feed on dead carcasses of animals, fish, and other fowl.

A list of unclean birds of Palestine is given. This is another point that reveals that the Mosaic system was intended for the nation Israel and also for the particular land of Palestine. Some of these birds sound strange to us. They fall into the family of the eagles and the hawks, the vultures and the ravens, the owls and cormorants, and the swans and pelicans. They don’t even sound appetizing. They are the “dirty birdies” because of their feeding habits. Now remember, some people eat some of these birds today. I can’t say I would like any of them, but whether we eat them or don’t eat them makes no difference—meat will not commend us to God. The point is that it was teaching Israel to make a distinction. They had to make a decision about what was clean and unclean.

This section throws some light on the experience of Elijah. He was fed by the ravens—dirty birds. Elijah did not eat the ravens, but they fed him. This was a humbling experience for this man of God who obeyed God in every detail.

These laws seem to have been intended, 1. As a test of the people’s obedience, as Adam was forbidden to eat of the tree of knowledge; and to teach them self-denial, and the government of their appetites. 2. To keep the Israelites distinct from other nations. Many also of these forbidden animals were objects of superstition and idolatry to the heathen. 3. The people were taught to make distinctions between the holy and unholy in their companions and intimate connexions. 4. The law forbad, not only the eating of the unclean beasts, but the touching of them. Those who would be kept from any sin, must be careful to avoid all temptations to it, or coming near it. The exceptions are very minute, and all were designed to call forth constant care and exactness in their obedience; and to teach us to obey. Whilst we enjoy our Christian liberty, and are free from such burdensome observances, we must be careful not to abuse our liberty. For the Lord hath redeemed and called his people, that they may be holy, even as he is holy. We must come out, and be separate from the world; we must leave the company of the ungodly, and all needless connexions with those who are dead in sin; we must be zealous of good works devoted followers of God, and companions of his people.

Well, those are some of the remarks by the different commentaries. It seems there is no real set answer as to whether the Waterhen or Water-hen was the intended bird. The list of Unclean and Clean birds was for the Israelites and not us today. It is not even for them today. Why write about them, because it is interesting. To me, it comes down to a decision on their part and ours today whether we want to obey the Word of God.

Most of the birds seem to have a diet that would cause eating that bird to make people sick or to die. Not all of them are in that category. It could be that they were not to eat a specific bird because they were few in number at that time and it could have caused them to go extinct. (That happens today.) It comes to obedience. That said, let’s see what a Water Hen really is.

Water-hen or Waterhens are in the Rallidae – Rails, Crakes & Coots Family. According to Wikipedia’s article on the Waterhen:

Waterhen may refer to any of the following: 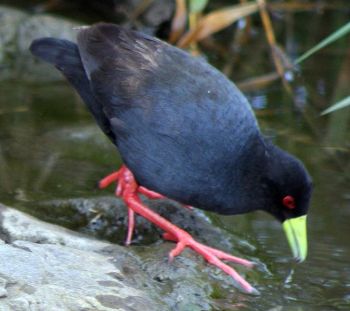 The adult Black Crake is 19–23 cm long with a short tail and long toes. As its name implies, the adult has mainly black plumage, with a brown olive tone on the wings and upperparts which is rarely detectable in the field. The eye is red, the bill is yellow, and the legs and feet are red, duller when not breeding.

The sexes are similar, but the male is slightly larger. Most males, but only 10% of females, have a hooked upper mandible. The immature bird has brown upperparts and a dark grey head and underparts. Its bill is greenish yellow, and its feet and legs are dull red. The downy chicks are black, as with all rails.

The Black Crake is extremely aggressive when breeding and will attack birds of many species, but especially other rails. It will attack and kill rails of species as large as itself.

The nest is a deep neat bowl made from wetland plants and built by both sexes in marsh vegetation or on the ground in a dry location. The nest is also sometimes constructed up to 3 m high in a bush.

If it was a Redshank(e), then we have a completely different bird in a different family, the Scolopacidae – Sandpipers, Snipes. If so, that would mean I would have to make yet another “Bird of the Bible” category. Humm!

Of the three last bird pictures here, they do all have something red. The Moorhen has a red beak and the other two have red legs. You realize that these names are today’s name. They do change over the years. What ever bird this verse applies to, it has been enjoyable for me to investigate it. It has caused me to be in God’s Word, search the Commentaries, and check out the many birds the Lord created. And I trust you have benefited from it also and you might even dig around and find more about these verses.

And I get to add another Bird of the Bible page.

Birds of the Bible – Waterhen

All Birds of the Bible articles.