Let no man despise thy youth; but be thou an example of the believers, in word, in conversation, in charity, in spirit, in faith, in purity.   (1st Timothy 4:12)

Don’t under-estimate the big ideas of young boys—whether those boys are from Israel, Utah, or Oklahoma.

For example, Israel’s David, when young enough that some considered him as just a boy, successfully challenged and killed Goliath the gigantic Gittite.(1) And more recently, there’s kindergartner Adrian Zamarripa, who tried to drive from Ogden (Utah) to California, to buy himself a Lamborghini.(2),(3)

For the Utah state trooper who made a “traffic stop”, the incident was not what he originally expected.

Trooper Rick Morgan … saw the car swerving so badly on Interstate 15 in Odgen, Utah, that he thought the driver was impaired or needed medical attention. He was driving 32 mph in an area with a speed limit of 70 mph. Morgan told the Associated Press that [the car’s driver] did not respond to his [flashing] lights but pulled over when he hit his siren. “I approached the vehicle and I was expecting to find somebody who needed an ambulance or paramedics,” Morgan said.(3)

But the driver was a 5-year-old kindergartener, Adrian Zamarippa.

Last week [May 4, 2020], 5-year-old Adrian Zamarripa took $3 out of his piggy bank, stole the keys to his parents’ SUV in Ogden, Utah, and went for a joyride on the freeway, following the signs that pointed south to Los Angeles. When the kindergartner was pulled over on Interstate 15 … he told the shocked highway patrol officer that he was on his way to California to buy a Lamborghini sports car.(2)

How did that happen?

Adrian’s 16-year-old sister, Sidney Flores, who was babysitting, had taken a nap about 11 a.m. while her mom and stepfather were away at work, and that’s when her little brother decided to take the keys from a hook near the door and go after his dream. “We thought he’d been kidnapped and we were all panicked,” said Sidney, speaking on behalf of her family because her parents understand limited English. “I called my mom at work and she came rushing home, crying,” she said. “It never occurred to any of us that he would take off in the car by himself. How would he know how to do that?” Nobody in the family had ever encouraged Adrian to drive, said Sidney, except for when he rode up and down the sidewalks in a battery-powered toy truck at age 2.(2)

Officer Morgan’s dash-cam video recording shows the vehicle pull over onto the multi-lane highway’s left shoulder, and stop, in response to Morgan’s flashing lights. Morgan then approached the driver’s window, to speak to the driver. The recording provides video and audio of this unusual encounter.

But when the window came down, Morgan said it was pretty clear that it was “a very under-aged driver who was behind the wheel.”(3)

Behind the wheel, in this case, meant sitting on the driver’s seat edge, so that his short legs could reach the brake pedal—it took both feet to brake the car to a full stop.  The dash-cam footage records audio of Officer Morgan questioning the young driver.(4)

“How old are you? You’re 5 years old?” Morgan says in the video. “Wow, OK. Where did you learn how to drive a car?” The boy told the trooper he was planning to drive to California to buy himself an Italian luxury sports car [specifically, a Lamborghini]. “He might have been short on the purchase amount, as he only had $3 dollars in his wallet,” the Utah Highway Patrol said in a statement on Twitter. The boy’s parents were contacted and they took custody of their son and the vehicle.(3)

But Adrian is not the first precocious youngster to do what many would not imagine possible for someone so young, nor will he be the last.

More than a century ago, a 6-year-old boy named Jack played the piano, as his older brother fiddled, at a Texas saloon, earning big money for hours till midnight. But this opportunity was cut short by gunfire—and Jack’s saloon piano playing career was terminated by his mother, when she learned about the shooting.(5)

That little boy grew up to be “Catch-‘em-alive” Jack Abernathy, the youngest man to be appointed a U.S. Marshal—appointed by none other than Teddy Roosevelt.(5)  Jack was already famous for catching wild wolves alive, with his bare hands, so he could sell them to zoos. Later (as U.S. Marshal), he caught violent criminals, though his hands usually then held firearms.(5),(6)

If you think Catch-‘em-Alive Jack’s two precocious sons—Louis (“Bud”) and Temple (“Temp”—“I’m not a little boy; I’m a little man!”)—followed in their father’s footsteps, as daring adventurers, you’d be right.(6),(7)

Bud and Temp Abernathy took their first cowboy adventure in 1909, at ages 9 and 5 –traveling horseback (with a shotgun) from their home in Oklahoma to the Governor’s Mansion in New Mexico and back.(6),(7) One night they lodged with men who identified themselves as being “in the cattle business”; their hosts were cattle rustlers, who hospitably respected them, yet one of the rustlers had recently been in a gunfight where he tried to kill their father (Jack), who was then U.S. Marshal.(6),(7)

On returning to a hometown welcome in Oklahoma, one lady emotionally questioned why their mother had permitted this reckless adventure—to which 5-year-old Temp replied that she was dead.(6)

The next adventure Bud and Temp took in 1910, at ages 10 and 6, was to ride horses from their home in Oklahoma to New York City, unsupervised—more than 1500 miles.(6),(7) Bud sent telegrams to their father, on arrival in different cities along the way—including visiting Comanche Chief Quanah Parker (in Oklahoma’s Indian Territory) and, at the White House, President Taft, plus they briefly addressed both House of Congress.(6),(7)

The trip’s main goal was timely reached—rendezvousing with their dad (Jack, who arrived in New York City by train) at the port where Teddy Roosevelt would arrive, returning from his exploits in Africa.(6),(7) Teddy’s arrival was celebrated by a huge ticker-tape parade, with Bud and Temp (on horseback) immediately behind the former president’s car; the equestrian lads were followed by Teddy’s mounted Rough Riders.(6)

Other adventures followed, including the boys (mostly Bud, as Temp could hardly reach the pedals) driving a small car from New York back to Oklahoma, while their horses rode the train.(6),(7)

Soon afterward, in 1911, the two boys rode horses from the Atlantic Ocean (at New York) to the Pacific Ocean (at San Francisco), including a calamity where they almost died, after temporarily losing their horses.(6),(7)

Then there was a motorcycle trip in 1913, with stepbrother Anton.(6)

To recount details of just the highlights of the Abernathy boys’ adventures would require a book—in fact, more than one book, plus a museum.(6),(7),(8) 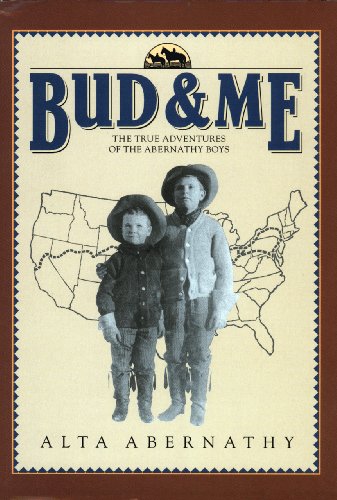 But there is at least one take-away lesson—for all of us—that we should never under-estimate the young. Children are capable of a whole lot more than most imagine!(9)

No wonder big-picture-thinking Christians invest resources and messaging efforts for reaching children (and more such outreach to come, God willing)—even very young kids are ripe for learning about their wonderful Creator.  Let us help, not hinder, them as they are learning about and coming toward the Lord Jesus Christ.(9)