All the birds of the heavens made their nests in its boughs; Under its branches all the beasts of the field brought forth their young; And in its shadow all great nations made their home. (Ezekiel 31:6 NKJV)

*
The small bird family Callaeidae (also named in some sources as Callaeatidae) is endemic to New Zealand. It contains three monotypic genera; of the three species in the family, only two survive and both of them, the Kokako and the Saddleback, are endangered species, threatened primarily by the predations of introduced mammalian species such as rats, mustelids and possums. A third, the Huia became extinct early in the 20th century.

The Callaeidae are often known as wattlebirds, a term that leads to confusion, as there are other, unrelated species with this same name, notably the large Australian wattlebirds of the family Meliphagidae, which are honeyeaters. For this reason New Zealand wattlebirds is the informal name for this family used by the scientific community. (Wikipedia with editing) 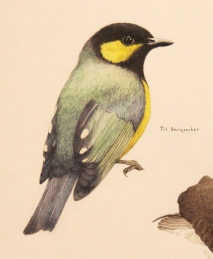