During my junior high years, living in a rural part of Maryland, I learned and enjoyed the art of catching crayfish.   (Nowadays I just eat them at restaurants!)   As a teenager, I was neither an astacologist (crayfish scientist) nor a serious catcher of crayfish (which is the same crustacean known to some as “mudbug” and in Louisiana as “crawfish”), so I did not use a “crayfish trap”.  Rather, as described below, I used a homemade dipping net, to catch those greenish critters that looked like lobsters.

Crayfish like drainage ditches and slow-moving streams, especially those with banks that are shaped in ways that provide hiding places for crayfish (and habitat for what crayfish eat), including underwater rocks or logs or roots.

After a heavy rainfall the velocity of stream currents may increase, as it drains, but crayfish can act to maintain their position at the edge of such drainage:  “Crayfish … help maintain position [in face of faster current flow] by altering body posture to counteract the effect of drag when exposed to an increase in current velocity.”  [Quoting from Paul S. Giller & Björn Malmqvist, THE BIOLOGY OF STREAMS AND RIVERS (Oxford University Press, 2008), page 122.]  Crayfish care about staying and defending their “home turf”  –  i.e., they are territorial, and some will fight to defend a favorite streambank crevice.  [Giller & Malmqvist, pages 131-132.]

Crayfish are omnivores – they emerge from their hiding places, especially when it is dark (from “dusk to dawn”, to borrow an old TNT expression from Chaplain Bob Webel – or on days when it is cloudy), to find and feed on freshwater snails, fish eggs, tadpoles, worms, algae, grains, and other plant material. The dominating influence of crayfish, as “keystone predators” in the food webs of drainage ditches and sluggish stream-waters (where they live), is produced directly, as predators, and indirectly, by eating riparian plant cover used by aquatic invertebrates.  [Giller & Malmqvist, page 204.]

Drainage ditches are a favorite habitat of crayfish, not just in Maryland.  “Ditches are of course just man-made sloughs [pooled streamwater that only moves slowly], but they are important to the survival of many species of life in the state.  Ditches are necessary for allowing rain runoff much of the year, and wherever water is present for half the year or more there are likely to be populations of crawfishes  and other invertebrates, as well as their predators such as frogs, snakes, and turtles.  Even shallow ditches may be home to several species of crawfish, some quite uncommon and localized in distribution.”  [Quoting Jerry G. Walls, CRAWFISH OF LOUISIANA (Louisiana State University Press, 2009), pages 35-36.]

Where I (then) lived, in rural Baltimore County,  there was a bridge with a huge drainage pipe that allowed streamwater to flow in irregular patterns, around large and small rocks, so that the stream bank had indentations and crevices where the waterflow was somewhat shielded, providing places for small creatures (like baby fish and insect larvae) to avoid being swept downstream, though crayfish lurked nearby, always hungry for something small to eat, whether it be plant material or aquatic invertebrates.

When moving on land crayfish crawl, using their legs.  But, when underwater, they  “swim” or “paddle”, using their legs and when needed, the tail fan.  Rapid flipping of the crayfish tail enables the crayfish to suddenly propel itself backward  — it appears to “jump backwards” in the water.  This can provide a quick exit from anything facially threatening the crayfish.

Of course, the crayfish themselves were shy about large disturbances in the water, so wading into the stream (which might be ankle-deep to knee-deep) would scare crayfish into hiding places, some of which were located under the bridge or in underwater burrows nearby.

If you splash a stone into the water directly in front of a crayfish it would jet backwards to escape.  The escape maneuver was so reflexive and quick that the crayfish never looked before it “jumped” backward in the water, to escape whatever the perceived danger was in front of it.  After learning this crayfish habit it became apparent that crayfish could be easily caught, by taking advantage of this “knee-jerk” reaction, with a home-made “net”.  So how did we catch crayfish, down by the drainage pipe that conveyed streamwater under the bridge?

First, make a “net” to catch the crayfish with.  Reshape (by bending) a coat hanger into the shape of a lollipop profile, i.e., a straight line (for a handle) that is curved into a circle.  The resulting shape of the coat hanger resembles a somewhat small version of the frame of a tennis racquet (or badminton racquet), with the “loop” (circle or oval) part being about the size (circumference) of a soccer ball, easily enough room for catching a large or small crayfish.  The largest crayfishes that I caught were about the size of lobsters that you can eat at a Red Lobster restaurant.   But the metal frame needs a net  –  so you tear apart an expendable T-shirt, then you thread it onto the circular “loop” part of the reshaped coat hanger.  Ideally the result is somewhat like a dipping net for an aquarium.

The coat-hanger “dipping net” is the tool to be used for catching (netting) the crayfish, but keep in mind that a crayfish will try to exit if caught, so you need a bucket of water to “land” your catch if and when you catch one.  So you need to bring a bucket (or a pail will do!) that is half-filled with water, and it must be positioned near the spot where you expect to net your crayfish.

The next trick is to get a crayfish to “jump” into your net, in the streamwater, just before you jerk the net up and out of the water (so the crayfish can’t exit your net, upon realizing that he or she is caught!).

But how do you entice a shy crayfish to “jump” into your net?  Actually, it’s not very difficult, although it requires sequenced (and quick) timing as you perform two rapid movements.  With your net ready to “stab” the water just behind the crayfish (i.e., where his or her tail is located), drop a clod of dirt (or a small rock) about 6 inches in front of the crayfish’s head and front claws.  Instantly plunge your net behind the crayfish – which is now “jumping” backward to avoid whatever you dropped into the water.  Then quickly jerk the net up out of the water – you should have the crayfish secured inside your net, for a moment at least, so now you quickly dump the net into your bucket of water, and shake the crayfish loose from the net. 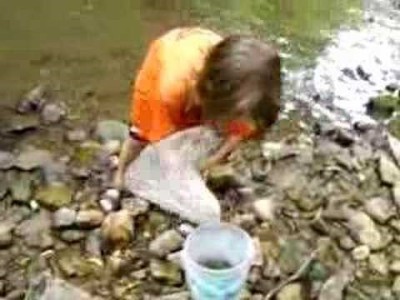 Catching in a Net

If your bucket is deep enough the crayfish is now covered in water, yet the water level needs to be low enough that the crayfish cannot swim to the top and then crawl out over the brim, to escape involuntary confinement.  Ironically, it was the crayfish’s reflex habit  —  the automatic “jump-back” reaction  —  that got the crayfish captured!

Now that you have a captive crayfish you need to feed it, to keep it alive, or else eat it (!) as you might a lobster, or just release it.  “Catch and release” is what I recommend.

But what does catching a crayfish have to do with the adventure of living the Christian life?

The crayfish illustrates the danger of carelessly over-reacting to a perceived danger.  Because the crayfish is startled by the rock dropped (into water facing the crayfish), it automatically reacts by “jumping” backward  –  without checking to see if a net is waiting there, to capture it! Since the Christian life involves a lot of balancing, we need to be careful about over-reacting to this or that.  Regarding the need to avoid over-reacting, as a Christian who strives to honor God in this life, see Charles C. Ryrie’s indispensable guidebook, BALANCING THE CHRISTIAN LIFE (Chicago: Moody Press, 1994), 252 pages.  [Thankfully, this book was provided to me, when I was a teenager, by my youth/college pastor, Chaplain Bob Webel.]

Over-reacting involves moving recklessly from one extreme to its opposite.  For an example of such over-reacting  —  “jumping” from one imbalanced extreme to another — consider how to teach children to inculcate a responsible “work ethic”.

In one Christian family, that I know, the parents were very concerned about raising children who might be lazy, unfocused, and/ or unresourceful.  (So far, so good.)   In other words, the parents wanted their children to have a “good work ethic”  –  self-initiative, goal-oriented diligence, and an entrepreneurial spirit,   —  to learn and practice practical life skills, so that they could be self-starters, as adults, who economically support themselves.

Of course, who would oppose teaching children a “good work ethic”?  Shouldn’t children learn to take the initiative, to recognize (and acquire) useful opportunities, to have productive ambitions, to focus on practical successes?

Yet promoting an entrepreneurial spirit, with an inner drive to ambitiously succeed in profitable work, can swing to an extreme that neglects altruistic service.  Without the balance of some commitment to altruistic service, however, the profit-motive-based ethic selfishly degrades to:  “If I don’t get paid money to do it, I won’t do it.”  That refusal to blend altruistic service (which the apostle Paul role-modeled in Acts 20:33-35) with a for-profit “work ethic” quickly uglifies into ordinary greed.  Is selfish greed better than selfish laziness?  Neither habit honors the Lord.  Both are wickedly sinful.  Both sins are ugly to look at  –  and, sad to say, we have many examples of both of those vices, lived out in front of us.

The Holy Bible provides a proper balance:  yes, we should work for profit and self-sustenance (2nd Thessalonians 3:10-12); however, some of the profit acquired should be used non-selfishly, to further the Lord’s work on earth (Matthew 6:19-21) and to compassionately “support the weak” (Acts 20:35). 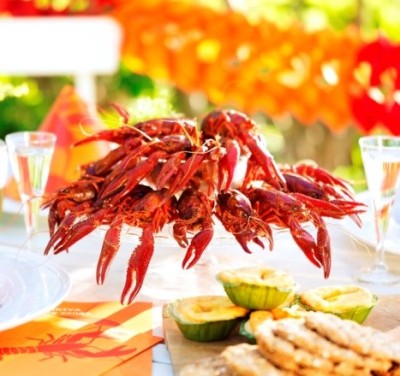 So next time you catch a crayfish, or eat a plateful at a Swedish crayfish party, or eat one at a Cajun restaurant, remember this lesson: don’t carelessly over-react!   —   review the big picture, and maintain a Biblical balance in whatever you are doing (1st Corinthians 10:31).