Here’s a famous Australian icon, or perhaps I should say, Western Australian Icon – the Black Swan appears on the state coat of arms, reflecting Perth’s original name as the Swan River Settlement. The first Western Australian stamp, in 1854, was a Penny Black, but featured a Black Swan and not Queen Victoria. I first became aware of it as junior stamp collector in Ireland when Australia issued a stamp celebrating the centenary of this stamp. Living in a land of white swans, I found the idea of a black swan bizarre.

Anyway, I photographed this bird emerging festooned in sea grass in St Kilda in Melbourne. Black Swans are almost exclusively vegetarian, and feed by dabbling, grazing or, like this one, upending. When it first emerged, it made a languid effort to remove some of the sea grass, looking as if it was adjusting its boa, as in the first photo. It then seemed to decide it wasn’t worth the effort and came out of the water still draped in green.

Black Swans betray their evolutionary affinity with white ones, by having white flight feathers, though these are usually only visible – and then strikingly so – in flight. In fact, the Black Swan is though to be very closely related to both the Mute Swan http://www.birdway.com.au/anatidae/mute_swan/index.htm of Eurasia and the Black-necked Swan of South America (the only other one of the 6 or 7 species of swan that isn’t entirely white). With a length of up to 140cm/55in, a wingspan of up to 200cm/79in and a weight of up to 9kg/20lbs, the Black Swan is rather small by Swan standards – the corresponding figures for the largest, the Mute Swan, are 160cm/64in, 240cm/95in, and 15kg/33lbs.

The Black Swan is widespread and abundant throughout mainland Australia and Tasmania, except in the top end of the Northern Territory and Cape York. It is also common in New Zealand, where it was introduced.

I’ve been adding marsupials to the Other Wildlife section on the website including:
Northern Brown Bandicoot
Koala
Brushtail Possum
Ringtail Possum and
Musky Rat-Kangaroo 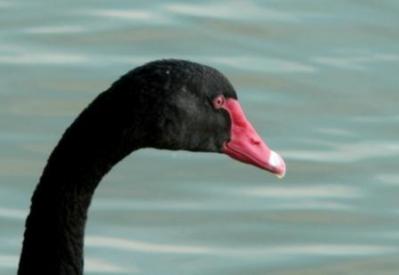 It was interesting to find out from Ian that the Black Swan is also down in Australia. We watch them all the time here when we are at Lake Morton in Lakeland, FL. I love the coloring on their beak. It is red with a white stripe around it. Also, the Swan is one of the birds mentioned in the Bible in the list of birds not to eat.

They have short legs and do not spring from the water to take flight. They run on the surface for about 15-20 feet while beating their wings to get airborne.

2 thoughts on “Ian’s Bird of the Week – Black Swan”