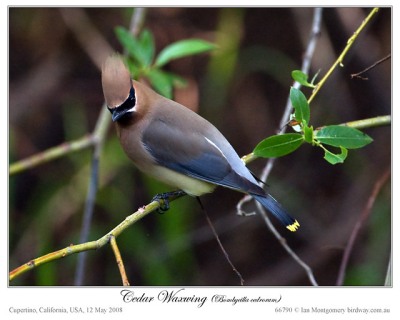 An American birder once said to me something to this effect: “you’re so lucky in Australia, all our North American birds are so drab by comparison”. It may be the case that American Parrots are thin on the ground since the sad demise of the Carolina Parakeet, but I think, nonetheless, that there are lots of fascinating American birds, and I’ve expressed regret in the past for the lack of Woodpeckers in Australia, for example. Here is one that is exotic by any standards, the Cedar Waxwing, and is quite common across the United States and, in summer, southern Canada.

This bird was one of a flock in a small reserve (McClellan Ranch Park) on the edge of Cupertino in the Bay Area last May. Waxwings are very partial to berries and range widely looking for food. The get their name from red, waxy tips to the secondaries, but these are often indistinct or missing, and are not visible in the photograph.

There are three species of Waxwings, the other two being the Japanese Waxwing and the (Bohemian) Waxwing of Western North America and northern Eurasia. The Bohemian Waxwing, slightly larger than the Cedar one, occasionally makes it to the British Isles in winter from northern Scandinavia and I remember seeing some once as a teenager in a suburban street in Dublin in the early 1960s. They looked very exotic to me then too. 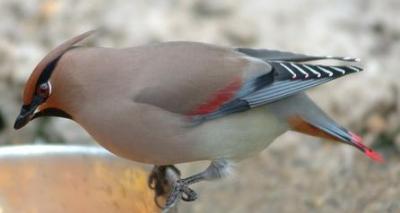 Cedar Waxwings have a diet of “fruit, flower petals, and insects.” They sometimes pass fruit back and forth and have been known to become very intoxicated by eating too many ripe berries. They are about 7 in (17.8 cm) long with a wingspan of 11-12.25 in (27.9-31.1 cm). Both the Bohemian and Cedar have a yellow trim on their tails, whereas, the Japanese waxwing has a red-trimmed tail.