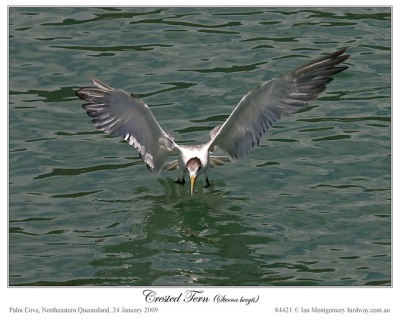 Please accept my apologies for a late posting this week.
At the end of January I was in Cairns and we visited Palm Cove, north of the city, to search for an immature Laughing Gull
(http://www.birdway.com.au/larini/laughing_gull/index.htm), that has been spending the Northern winter there. Laughing Gulls are rare trans-Pacific vagrants in Australia and always cause some excitement when they appear.
We found, and photographed, the gull okay, but while waiting for it to do its occasional forays for scraps past the fishermen on the wharf, I passed the time by photographing an immature, fishing Crested Tern – right at the other end of the Australian rarity scale and the commonest and most widespread marine tern. As luck would have it, just while I was photographing it flying towards me, it dived and caught, by tern standards anyway, a substantial fish.

In the first photo, you can see the greenish back of the fish at the surface just below the bill of the bird. The tern is braking its fall by spreading its wings and tail and has its feet splayed out in front of it ready for the impact with the water.

In the following photo, less that a second later, the tern has caught the fish expertly over its centre of gravity and is working hard to regain height. It didn’t drop the fish and the tern last disappeared into the distance with its prize.
Terns normally catch quite small fish, so it would be easy to speculate that this was an error of judgment on the part of an inexperienced bird. Or maybe it was just showing off in front of a camera-laden tourist.
One of the reason for a late posting is that I’ve been busy working on the website. The Next and Previous Family links that I mentioned last week now navigate through 30 more families beyond the New World Flycatchers as far as the Swallows. Substantially revised galleries include various Australian families such as:

Recently, I received a copy of a delightful and informative electronic document called ‘How Birds Fly’ by Stuart Cousland that he prepared and presents to schools in Victoria in his role of Education Coordinator for the (Mornington) Peninsula Bird Observers Club (part of BOCA). Some of my photos were used in it. I highly recommend it and copies are available free either on CD or as 5MB email attachment by contacting him on seastar@pac.com.au or (03) 5988 6228. 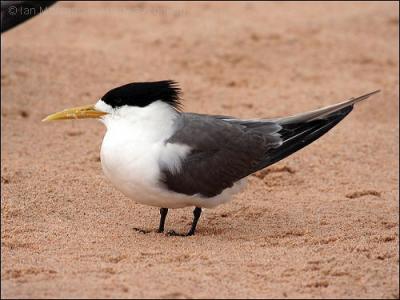 The Crested Tern that Ian mentions was hard to find on the new I.O.C. list. They keep changing names and genus around and the list was update in August this year. The Sterna bergii or Crested Tern was taken out of the Sterna genus and placed in the Thalasseus genus. Then they changed it to Swift Tern. You think that didn’t take some searching to find out it’s new name.
Here are some facts from Wikipedia:”The Greater Crested Tern, Crested Tern or Swift Tern, (Thalasseus bergii), is a seabird in the tern family which nests in dense colonies on coastlines and islands in the tropical and subtropical Old World. Its five subspecies breed in the area from South Africa around the Indian Ocean to the central Pacific and Australia, all populations dispersing widely from the breeding range after nesting. This large tern is closely related to the Royal and Lesser Crested Terns, but can be distinguished by its size and bill colour.” 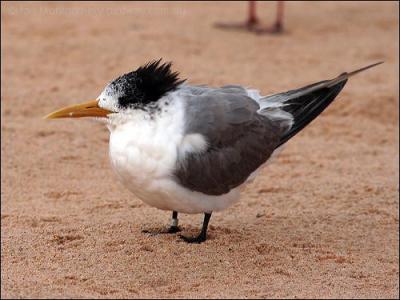 “The Greater Crested Tern has grey upperparts, white underparts, a yellow bill, and a shaggy black crest which recedes in winter. Its young have a distinctive appearance, with strongly patterned grey, brown and white plumage, and rely on their parents for food for several months after they have fledged. Like all members of the genus Thalasseus, the Greater Crested Tern feeds by plunge diving for fish, usually in marine environments; the male offers fish to the female as part of the courtship ritual.”

This is an adaptable species which has learned to follow fishing boats for jettisoned bycatch, and to utilise unusual nest sites such as the roofs of buildings and artificial islands in salt pans and sewage works. Its eggs and young are taken by gulls and ibises, and human activities such as fishing, shooting and egg harvesting have caused local population declines. There are no global conservation concerns for this bird, which has a stable total population of more than 500,000 individuals.”

The adults of both sexes are identical in appearance, but juvenile birds are distinctive, with a head pattern like the winter adult, and upperparts strongly patterned in grey, brown, and white; the closed wings appear to have dark bars.  The nests are located on low‑lying sandy, rocky, or coral islands, sometimes amongst stunted shrubs, often without any shelter at all. The nest is a shallow scrape in the sand on open, flat or occasionally sloping ground. It is often unlined, but sometimes includes stones or cuttlefish bones.

Fish are the main food of the Greater Crested Tern, found to make up nearly 90% of all prey items with the remainder including cephalopods, crustaceans and insects. Unusual vertebrate prey included agamid lizards and green turtle hatchlings.

“The Great Crested Tern feeds mostly at sea by plunge diving to a depth of up to 1 m (3 ft), or by dipping from the surface, and food is usually swallowed in mid-air. Birds may forage up to 10 km (6 mi) from land in the breeding season.”

The Greater Crested Tern occurs in tropical and warm temperate coastal parts of the Old World from South Africa around the Indian Ocean to the Pacific and Australia.”