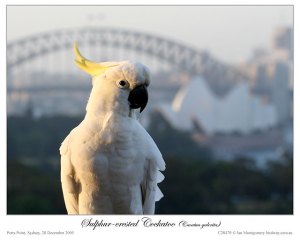 This one should perhaps be called Book of the Week, as my choice of species is to mark the release by Dorling Kindersley Australia of ‘BIRD Australia’ and I’m celebrating because they used more than 200 of my photos. Dorling Kindersley is part of Penguin Group and specializes in richly illustrated reference works. If you were on this list 2 years ago (20 November 2007), you would have received a Gibberbird photo and news of the publication of the original UK edition ‘BIRD The Definitive Visual Guide’, which included more than 100 of my photos.

The first photo of the Sulphur-crested Cockatoo, in light of the setting sun, appears as a double page spread in ‘BIRD Australia’. I’m biased, of course, and think it is a splendid book, so I’ll quote the objective Graeme Hamilton, CEO of Birds Australia (the organization not the book), who says in the foreword: “BIRD Australia superbly illustrates the astonishing diversity of Australian birds . . .”. Christmas is coming so check it out: http://www.penguin.com.au/lookinside/spotlight.cfm?SBN=9781740336994&Page=details . 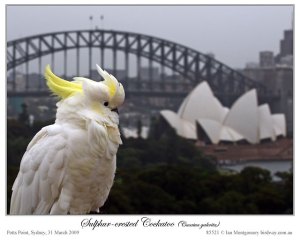 The first photo was taken in December 2005 from an apartment in Potts Point. The apartment belongs to friends of mine and I regularly stay there when visiting Sydney. Sulphur-crested Cockatoos are visitors there too and sometimes come up from the Domain to perch on the balcony.

When I took that photo, I later regretted not using a smaller aperture to improve the depth of field and make the background icons sharper. It’s one of the rules of bird photography that you (almost) never get the same opportunity twice. Rules are made to be broken, and the Cockatoos reappeared when I was visiting Sydney in March of this year. This time it was a wet and windy day, and the ruffled feathers and crest of the Cockatoo in the second photo seemed to me to be mimicking the sails on the Opera House.

Recent additions to the website include more photos from the northern trip:

Talk about a “bad hair day” (feather day in this case)! What a beautiful bird! Many of these birds have been tamed and make nice pets, though I think they should be free to roam. You can enjoy more of Ian’s Sulphur-crested Cockatoo photos (Click here), All photos of Ian’s (Australian) Cockatoos & Allies – [Family: Cacatuidae]

For every kind of beast and bird, of reptile and creature of the sea, is tamed and has been tamed by mankind. (James 3:7 NKJV)

“A cockatoo is any of the 21 species belonging to the bird family Cacatuidae. Along with the Psittacidae (the true parrots) and the Strigopidae, they make up the order Psittaciformes. The name cockatoo originated from the Malay name for these birds, kaka(k)tua (either from kaka “parrot” + tuwah, or “older sister” from kakak “sister” + tua, “old”). Placement of the cockatoos as a separate family is fairly undisputed, but it is not resolved whether or not other living lineages of parrots (such as the lories and lorikeets) are as distinct as they appear. The family has an Australasian distribution, ranging from the Philippines and the eastern Indonesian islands of Wallacea to New Guinea, the Solomon Islands and Australia.

Cockatoos are, on average, larger than true parrots; however, the Cockatiel, the smallest cockatoo, is a small bird, while the largest cockatoo, the Palm Cockatoo, at 55–60 cm (22–24 in) long is smaller than the larger macaws and several other parrots. Their plumage is generally less colourful than that of other parrots, being mainly white, grey or black with some colour elsewhere. They have strong bills and feet, and are instantly recognisable by their showy crests. The diet of the cockatoos is composed of seeds, tubers, corms, fruit, flowers and insects. They often feed in large flocks, particularly if they feed on the ground. Cockatoos are monogamous and nest in tree hollows.

Cockatoos are popular birds in aviculture, although, for some species, the largely illegal trade in wild-caught parrots has threatened their survival. Some cockatoo species are adversely affected by habitat loss and particularly by the loss of suitable hollows for nesting when large, mature trees are cleared; conversely, some species have adapted well to human changes and are considered agricultural pests.” (From Wikipedia – Cockatoo)