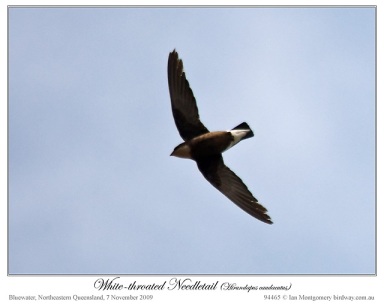 My (Ian’s) apologies for a late bird of the week – this should have gone out last week.

The White-throated Needletail is a large swift, length 20cm/8in, that visits eastern Australia in the southern summer. It’s main claim to fame is that, in level flight, it is one of the fastest, perhaps the fastest, bird in the world with a claimed top speed of 170km/105miles per hour. (The Peregrine Falcon can reach supposedly 300km/200miles per hour in a dive, but that’s a different event in the avian Olympics.)

Swifts are the most aerial of birds and feed, drink and maybe even sleep on the wing. It used to be thought that White-throated Needletails never landed in Australia, but recent studies with radio-tracking show that they can roost in trees, though it is uncertain how predominate this is. They follow weather systems and are often associated with stormy weather. The ones in the photographs appeared near my house last week during showery weather and the birds appeared to be feeding over trees. 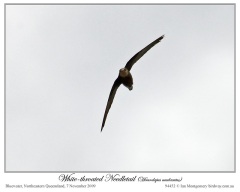 The White-throated Needletail has a barrel-shaped body and a blunt tail, distinguishing it from the slimmer Fork-tailed Swift which also migrates to Australia. The name ‘needletail’ refers to short spiny ends to the tail feathers, just visible if you look carefully at the first photo.

Fast fliers are naturally a challenge to photograph. I practice keeping both eyes open so that I can track the bird until it becomes visible in the viewfinder. Camera settings that help are fast shutter speeds – 1/3000 and 1/5000 sec in these photos – obtainable by using maximum aperture with manual settings and aperture priority and/or high ISO film speed. Some telephoto lenses permit distant settings (eg > 5.6m) to aid automatic focusing and I use a single focusing point in the center of the field of view.

Recent additions to the website include photos of Black-necked Stork/Jabiru and the elusive Black Falcon .

Even the stork in the heavens Knows her appointed times; And the turtledove, the swift, and the swallow Observe the time of their coming. But My people do not know the judgment of the LORD.
(Jeremiah 8:7 NKJV)

Here’s some additional information about these birds:

“These birds have very short legs which they use only for clinging to vertical surfaces. They build their nests in rock crevices in cliffs or hollow trees. They never settle voluntarily on the ground and spend most of their lives in the air, living on the insects they catch in their beaks.

These swifts breed in rocky hills in central Asia and southern Siberia. This species is migratory, wintering south to Australia. It is a rare vagrant in western Europe, but has been recorded as far west as Norway, Sweden and Great Britain.

The White-throated Needletail is a large bird, similar in size to Alpine Swift, but a quite different build, with a heavier barrel-like body. They are black except for a white throat, white undertail, which extends on to the flanks, and a somewhat paler brown back.

The Hirundapus needletailed swifts get their name from the spiny end to the tail, which is not forked as in the Apus typical swifts. “These are all part of the Apodiformes Order, which includes the Apodidae – Swift Family.