Since I have written about the Birds of the Bible that our missionaries in Niami, Niger, WA and Paraiba, Brazil, it is now time to see what our missionary down in Johannesburg, SA might possible see.

Checking the internet for the birds in that area, I was able to get a list of sorts. Since all birds were created by the Lord, I decided to show more than just the named ones.

So God created the great sea creatures and every living creature that moves, with which the waters swarm, according to their kinds, and every winged bird according to its kind. And God saw that it was good. And God blessed them, saying, “Be fruitful and multiply and fill the waters in the seas, and let birds multiply on the earth.” And there was evening and there was morning, the fifth day. (Genesis 1:21-23 ESV)

So they have been multiplying and here are some of those in the Johannesburg area.

Con Joubert Bird Park
The Con Joubert Bird Park can be found on Desert Road in residential Randfontein and contains a permanent pan with a good bird hide. One can walk around the pan on the inside of the perimeter fence (1/2hr). Species to be seen include, Maccoa Duck, Black-necked Grebe, Little Grebe, Cape Shoveler, African Purple Swamphen, Red-knobbed Coot and Common Moorhen. Lesser Swamp-Warbler, African Reed-Warbler and African Reed-Warbler may be seen in the reedbeds and sometimes Ruff, Wood Sandpiper and Little Stint occur in summer.

Northern Farm (Diepsloot)
This nature reserve is one of Johannesburg’s best kept secrets, with over 300 recorded species. 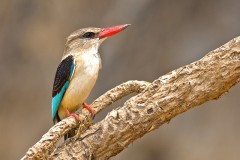 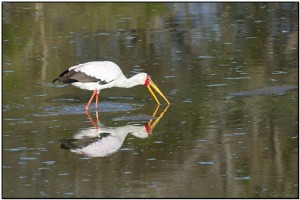 This sanctuary is often prolific with a variety of waterfowl. The hides are no longer accessible, but good views are available from “The Drive”, a 2km circular road which surrounds the pan. A spotting scope is recommended, as the area is fenced. Notable visitors are Black Heron, Greater Flamingo, Lesser Flamingo and Great Crested Grebe. There are several active heronries with Goliath Heron, African Spoonbill, Black-headed Heron, Grey Heron, Great Egret, Reed Cormorant and Little Bittern. The reedbeds and their edges should be actively searched for African Purple Swamphen, Black Crake, African Rail, Little Bittern and roosting Black-crowned Night-Heron. The open stretches of the pan almost always have Spur-winged Goose, Red-billed Teal, and numbers of Egyptian Goose and Yellow-billed Duck. A central island supports a colony of White-breasted Cormorant. The shore edges often hide Glossy Ibis, Hadeda Ibis and African Sacred Ibis. Black-winged Stilt and Pied Avocet are regulars and during the wader migration there are sometimes irregular visits from Wood Sandpiper, Common Sandpiper and Eurasian Curlew sandpiper. Spotted Thick-knee hide in the surrounding grasslands.

Florence Bloom bird Sanctuary
Florence Bloom Bird Sanctuary is found within Delta Park, with the entrance at the intersection of Road No.3 and Road No.5 in Victory Park. Species to be seen on the dam include African Black Duck, Little Grebe, Red-knobbed Coot and Common Moorhen. The surrounding reeds and trees is host to Willow Warbler, Great Reed-Warbler, Little Rush-Warbler and Tawny-flanked Prinia. Little Sparrowhawk, European Bee-eater, Red-throated Wryneck and African Palm-Swift have also been spotted.

Krugersdorp Game Reserve
The habitat is mainly grassveld with small dams and reedbeds at the northern-most end. The vast areas of open grassland in the reserve provide the visitor the opportunity to observe many of the grassland species of Gauteng. A densely wooded valley runs through the reserve and includes a selection of bushveld birds. Approximately 200 species have been recorded. There is a good network of roads and walking is not permitted, so one has to bird from the car.

Birding
1) Grassveld areas include most of the reserve and the following species may occur; Wing-snapping Cisticola, Cloud Cisticola, Desert Cisticola, and Zitting Cisticola, Rufous-naped Lark, Ant-eating Chat and African Pipit. Several pairs of Southern Black Korhaan can be seen while the more secretive Kurrichane Buttonquail also occur. In summer Montagu’s Harrier have been recorded quartering over the grasslands.
2) The reedbeds house Southern Red Bishop, White-winged Widowbird, Red-collared Widowbird and Cape Grassbird.
3) The dam usually has Black-headed Heron, Cattle Egret, Glossy Ibis and African Sacred Ibis around it, with Yellow-billed Duck, White-faced Duck, Red-knobbed Coot and Egyptian Goose.
4) An exiting new feature is a large walk through aviary which boasts a wide variety of species. The aviary is built into an old quarry and provides natural vegetation for the birds. 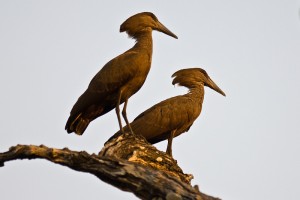 Walter Sisulu National Botanical Garden
The Walter Sisulu National Botanical Garden is an outstanding birding locality close to the urban centre of Johannesburg. The relatively small area, virtually surrounded by urban development, is managed by the National Botanical Institute (NBI) and includes a diverse array of habitat types which ranges from steep cliffs surrounding a magnificent waterfall to open scrubland and riverine woodland. Several short walks run through the garden and the surrounding natural areas. The JCI Geological Trail has recently been developed and gives visitors the opportunity to not only walk along the Roodekrans Ridge and in the Nature Reserve portion of the garden, but also to learn something about the fascinating geology of the area. Guided tours can be arranged for groups. Information brochures, a map and a bird list are available at the gate or NBI office. A morning’s birding in the garden during summer can easily produce a list of 70 species. A total of 230 species have been recorded in the garden.
Birding
1) The Verreauxs’ Eagle is an icon of the area and attract visitors from all over. Generations of Verreauxs’ Eagle have bred on the steep cliff face next to the waterfall for many years. This is definitely one of the best sites in the country to view these masters of the african skies.

These pictures were taken by John Kormendy on trips to Johannesburg and Cape Town. Fantastic shots.
http://chandra.as.utexas.edu/~kormendy/southafricabirds.html