Here’s another bird from the forest of New England, NSW, the Bassian Thrush.

In the Northern Hemisphere, thrushes feature among the best known and most melodious birds of gardens and woodland, such as the Eurasian Blackbird, Song Thrush and Mistle Thrush and the (North) American Robin. They are so popular that two have been successfully introduced into southeastern Australia: the Blackbird (widespread in southeastern Australia including Tasmania) and the Song Thrush (Melbourne and Geelong).

Ask a non-birder in Australia about native Thrushes, however, and you’d probably draw a blank. In fact there are two on the mainland and a third, the Island Thrush, on Christmas Island. The two mainland ones, the Bassian and the Russet-tailed Thrushes, are very similar and are secretive inhabitants of dense forest, the Bassian in eastern and southern Australia from the Atherton Tableland in northeastern Queensland to Tasmania and the Mount Lofty Ranges in South Australia. The Russet-tailed has a more limited distribution in northeastern Queensland and southeastern Queensland and northeastern New South Wales. The ranges of the two species overlap without interbreeding, but they have been treated as separate species and distinct from the Eurasian Scaly Thrush only since 1983 (Ford, J. http://www.publish.csiro.au/paper/MU9830141.htm ). 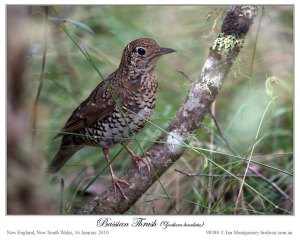 In the photographs, this bird can be identified as Bassian by the less rufous colour of the back, particularly the rump and tail, slight longer tail and stronger half-moon patterns on the back. Probably the best field mark are the outer tail feathers which in flight are conspicuously whiter in the Russet-tailed and, if all else fails, altitude comes to the rescue as the Russet-tailed isn’t usually found above 750 metres (this one was at 1,500m). Their songs differ too: the Bassian is rather like the Eurasian Blackbird in tone, while the Russet-tailed has a clear two-note whistle. Unfortunately, neither species is very vocal. It’s probably not surprising that it took so long to separate the species! The name Bassian, I assume, refers to the East Bassian bioregion of coastal southeastern Australia and Tasmania.

Until a couple of centuries ago, the Eurasian Blackbird was a secretive bird of forests until it discovered the delights of gardens and became accustomed to humans. Maybe the same is happening with the Bassian Thrush. This one was near a picnic area and much less shy than normal, and they do turn up in gardens sometimes.

(Referring to Springs in the valleys):

By them the birds of the heavens have their home; They sing among the branches.
(Psalms 104:12 NKJV)

The Bassian Thrush is in the Turdidae Family of the Passerformes Order. The family not only includes the Thrushes, but also the Rufous Thrushes, Whistling Thrushes, Ground Thrushes, Bluebirds, Solitaires, Nightingale-Thrushes, Veery, American Robin, Cochoas, Shortwings, and Alethes and others. Quite a large family (183) to say the least.