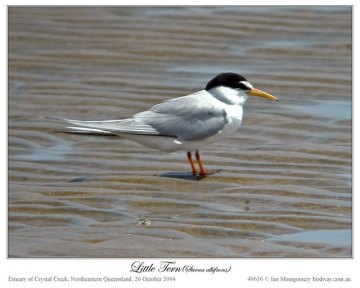 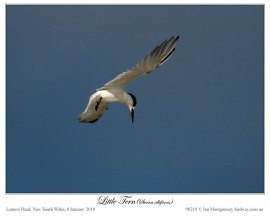 The Little Tern is one of two tiny species of Tern found in Australia, the other being the very similar Fairy Tern. In breeding plumage, as in the first photo, the Little Tern is distinguished by having black lores forming a line through the eyes connecting the black cap to the yellow bill and it the bill usually has a black tip. Both species are of a similar size with a length of 20-28cm/8-11in. This bird was photographed in Queensland in October and would have been a member of the local breeding population.

In non-breeding plumage, as in the second photo, both species have white lores but the Little Tern has black primaries and a black bill while the Fairy Tern has grey primaries and a black-tipped bill with a yellowish base. This bird was photographed in New South Wales in January, so it is probably a member of the Asian breeding population that spends the northern winter in Australia. This bird is fishing by hovering in a characteristic posture with the tail bent sharply downwards. 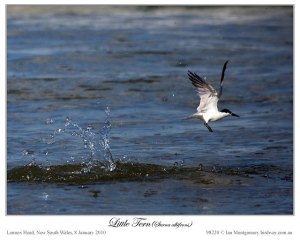 The third photo was taken two seconds after the second photo, and the bird is taking flight again after an unsuccessful dive. An average Little Tern weights only about 50g./2oz. so it must have hit the water with tremendous impact. It is fishing, as is typical, in shallow water – the whitish reflection in the background is the surf breaking farther out.

The Little Tern has a widespread distribution through Eurasian, Africa and Australasia. In Australia it occurs in northern, eastern and southern coastal areas from Broome to the Yorke Peninsula and in Tasmania. In contrast, the Fairy Tern occurs mainly in western and southern areas of Australia, but the ranges do overlap in Victoria, South Australia and northern Western Australia.

On the same day Jesus went out of the house and sat by the sea. (Matthew 13:1 NKJV)

The Little Tern is in the Laridae Family of the  Charadriiformes Order. This family, Laridae, not only has Terns, but also Noddys, Skimmers, Gulls, and Kittwakes. There are 102 birds in the family. As far a birdwatching goes, that family gives me more fits on trying to ID them. But as small as those Little Terns and the Fairy Terns, I might be able to ID them. But it is a long way to go to see if I could. Good thing Ian is down there to take their photos so we can enjoy them up here.

“This bird breeds on the coasts and inland waterways of temperate and tropical Europe and Asia. It is strongly migratory, wintering in the subtropical and tropical oceans as far south as South Africa and Australia.

The Little Tern breeds in colonies on gravel or shingle coasts and islands. It lays two to four eggs on the ground. Like all white terns, it is defensive of its nest and young and will attack intruders.

Like most other white terns, the Little Tern feeds by plunge-diving for fish, usually from saline environments. The offering of fish by the male to the female is part of the courtship display.

This is a small tern, 21-25 cm long with a 41-47 cm wingspan. It is not likely to be confused with other species, apart from Fairy Tern and Saunders’s Tern, because of its size and white forehead in breeding plumage. Its thin sharp bill is yellow with a black tip and its legs are also yellow. In winter, the forehead is more extensively white, the bill is black and the legs duller. The call is a loud and distinctive creaking noise.” (Wikipedia)

One thought on “Ian’s Bird of the Week – Little Tern”