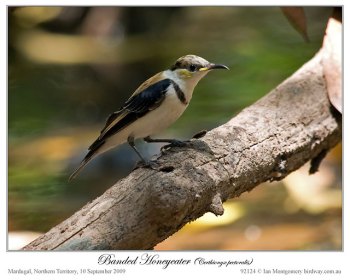 I’ve continued updating some of the Honeyeater galleries on the website. Last week, we had one of the largest, the Helmeted Friarbird, but here is one of the smaller ones, the Banded Honeyeater with a length of about 12cm/5in. Fledgling Banded Honeyeaters have fudge-coloured upper parts, wings, tail and breast-band which change to black in adult birds (of both sexes), contrasting smartly with white underparts, throat and rump.

At least that’s what they are supposed to do. In practice, most of the birds one sees are in transitional plumage varying between that shown in the first photo at a waterhole, which has the brownish back and head and yellow cheeks of the juvenile, but the black wings and tail of the adult. The bird in the second photo feeding on melaleuca blossom, has got almost fully black and white plumage but still has a few brownish feathers on the back. On the trip to the Top End of the Northern Territory last year where Banded Honeyeaters are fairly common, I deliberately searched for a completely black and white bird without success, and this was the best I could find. I’d be interested to hear whether others have noticed this too.

The Banded Honeyeater has a northern distribution from the Kimberley region of Western Australia to North Queensland, where it is uncommon south of Cooktown. These birds are ‘blossom nomads’ and and in recent years have been seen regularly at White Mountains National Park, between Charters Towers and Hughenden and south of Townsville, when the grevilleas are in bloom in early winter.

Taxonomically, the Banded Honeyeater has traditionally been lumped in the same genus (Certhionyx) as the superficially similar Black and Pied Honeyeaters. Recently studies have indicated that the three species are not closely related and each has been relegated to its own (monotypic) genus, Cissomela in the case of the Banded. It is apparently closer to the White-cheeked Honeyeater and allies (Phylidonyris) while the Black is closer to the Scarlet Honeyeater and relatives (Myzomela). I’ve recently updated the galleries of all these species, including some colourful photos of Scarlet and White-cheeked feeding in red and yellow blossom respectively in Paluma last Friday. (Both these have featured as Bird of the Week previously, disqualifying them from, or at least handicapping them in, selection this week).

You will be well pleased visiting the Ian’s links above. All of those birds are very neat looking birds. The Lord has created the honeyeaters with a remarkable tongue that is “partially tubelike and split, with a brushlike tip superbly adapted for extracting nectar. Honeyeaters also have specially adapted kidneys that allow them to process maximum nutritional benefit from this food source.” (Complete Birds of the World, National Geographic)

More to be desired are they than gold, yea, than much fine gold: sweeter also than honey and the honeycomb. (Psalms 19:10 KJV)