And the pelican, and the gier eagle, and the cormorant, (Deuteronomy 14:17 KJV)

In the first Birds of the Bible – Cormorant, it was mentioned that they are one of the “unclean birds” not to be eaten, they have their own desalination system, and that they have been used for centuries in the Orient to catch fish for fishermen. Now, let’s look into some more facts about this family of birds.

“There is no consistent distinction between cormorants and shags. The names “cormorant” and “shag” were originally the common names of the two species of the family found in Great Britain, Phalacrocorax carbo (now referred to by ornithologists as the Great Cormorant) and P. aristotelis (the European Shag). “Shag” refers to the bird’s crest, which the British forms of the Great Cormorant lack. As other species were discovered by English-speaking sailors and explorers elsewhere in the world, some were called cormorants and some shags, depending on whether they had crests or not. Sometimes the same species is called a cormorant in one part of the world and a shag in another, e.g., the Great Cormorant is called the Black Shag in New Zealand (the birds found in Australasia have a crest that is absent in European members of the species).” Apparently, they are just appearing after “their kind.” There is variation in size, names and colors, but they are all related.

And God created great whales, and every living creature that moveth, which the waters brought forth abundantly, after their kind, and every winged fowl after his kind: and God saw that it was good. And God blessed them, saying, Be fruitful, and multiply, and fill the waters in the seas, and let fowl multiply in the earth. (Genesis 1:21-22 KJV)

Cormorant” is a contraction derived from Latin corvus marinus, “sea raven”. Cormorants and shags are medium-to-large seabirds. They range in size from the Pygmy Cormorant (Phalacrocorax pygmaeus), at as little as 45 cm (18 in) and 340 g (12 oz), to the Flightless Cormorant (Phalacrocorax harrisi), at a maximum size 100 cm (40 in) and 5 kg (11 lb). The majority, including nearly all Northern Hemisphere species, have mainly dark plumage, but some Southern Hemisphere species are black and white, and a few (e.g. the Spotted Shag of New Zealand) are quite colorful. Many species have areas of coloured skin on the face (the lores and the gular skin) which can be bright blue, orange, red or yellow, typically becoming more brightly colored in the breeding season. The bill is long, thin, and sharply hooked. Their feet have webbing between all four toes, as in their relatives.

They are coastal rather than oceanic birds, and some have colonised inland waters – indeed, the original ancestor of cormorants seems to have been a fresh-water bird. They range around the world, except for the central Pacific islands. 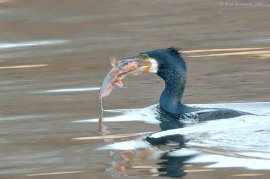 All are fish-eaters, dining on small eels, fish, and even water snakes. They dive from the surface, though many species make a characteristic half-jump as they dive, presumably to give themselves a more streamlined entry into the water. Under water they propel themselves with their feet. Some cormorant species have been found, using depth gauges, to dive to depths of as much as 45 metres.

After fishing, cormorants go ashore, and are frequently seen holding their wings out in the sun. All cormorants have preen gland secretions that are used ostensibly to keep the feathers waterproof.

Cormorants are colonial nesters, using trees, rocky islets, or cliffs. The eggs are a chalky-blue colour. There is usually one brood a year. The young are fed through regurgitation. They typically have deep, ungainly bills, showing a greater resemblance to those of the pelicans’, to which they are related, than is obvious in the adults.”

The Cormorants and Shags are another of the Lord’s fantastic creations from an All-powerful Creator.

Some quotes from Wikipedia