Hoatzin – The Stinker by A. J. Mithra

One of the most unusual birds, this interesting animal is
one bird that no one wants to keep in a cage.

The Hoatzin weight about 2 pounds, and is about 2 feet long, sometimes a bit more.
They have an almost entirely bare head, with a crest on top of it that is red,
and blue skin around the red eyes.

The Hoatzin is a rainforest bird, and lives in the lowland areas in the Amazon basin.
They love slow moving or swampy standing water, and the floods or small lakes..
It lives entirely in trees, vines and bushes, and is thus independent
of the different kinds of aquatic foods that each of these water types support.
In many areas the species is frequently associated with giant arums,
especially those of the genus Montrichardia, which constitute a favorite food.
In coastal zones Avicennia mangroves can be similarly important.
Hoatzins eat mostly young green leaves from rain forest plants.
An enlarged foregut containing bacteria helps them break down cellulose
and digest their food, an arrangement similar to that found in cattle.
When it has been ingested, the plant materials are fermented which gives
the bird a fairly foul odor, earning them the common name of Stinkbird..
Digestion takes many hours, and Hoatzins are often observed
resting the sternum on a branch.

The foregut of the Hoatzin accounts for a quarter of the bird’s weight,
and is so large that there is little room for flight muscles.

This accounts for the Hoatzin’s poor flying capability.

In many bird species, the period of time for which food is retained
is often measured in minutes, but the Hoatzin holds the record.
In experiments, liquids were retained for about 18 hours, and solids for 24-48 hours;
these retention times are similar to those found in sheep,
and are long enough to maintain stable populations of gut bacteria.

For every one that useth milk is unskillful in the word of righteousness: for he is a babe. But strong meat belongeth to them that are of full age, even those who by reason of use have their senses exercised to discern both good and evil. (Hebrew 6:13,14)

We too don’t venture far and wide, like these birds,because,
We have not yet learnt to fly yet… You know why?
We eat lots of spiritual food, but we don’t exercise our faith…Do we?

These birds take 24 to 48 hours to digest their food, but,
we haven’t yet digested the spiritual food which we had years back….

GOD has called us to be fliers like an Eagle and not clumsy climbers like Hoatzin…
When are we going to start exercising our faith and get rid of those
Spiritual cholesterol which hinders our spiritual flight?

But refuse profane and old wives’ fables, and exercise thyself rather unto godliness. (1Timothy 4:7) 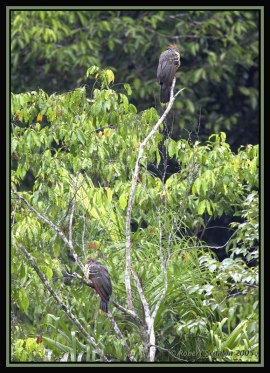 They live in groups, so the Hoatzin will have as many as 25 or 30 nests in one single tree.
Social groups of Hoatzins consist of a pair and their adult (mostly male) offspring …
The Hoatzin makes its nest in low branches in trees that hang out over the water
to avoid the predatory birds that might make a meal of their offspring.

Some of us are like these birds; we carry the Bible for protection…
Whereas, GOD expects us to carry HIS word in our hearts….
Even JESUS needed the word of GOD to fight against the devil when HE was tested
by satan, when HE started HIS ministry on earth…. Mathews 4:1 to 11
But, sadly, we still have our Bibles near our pillows for fear of evil..
Is THE BIBLE a scare-crow?

Therefore shall ye lay up these my words in your heart and in your soul, and bind them for a sign upon your hand, that they may be as frontlets between your eyes. (Deuteronomy 11:18)

The female Hoatzin will lay either two or three eggs, in a nest that is built of small twigs,
and hangs out over the water from a tree branch.
The two parents will both take turns keeping the eggs warm.
After about twenty eight days they will hatch.
The young Hoatzin will be fed by the parents the plant material
that the parents regurgitate.
All members participate in the feeding of chicks….
Hoatzin chicks have two claws on each wing, a feature that makes it easy for them
to climb and cling in the branches of trees.
Hoatzin chicks leave the nest frequently and may even dive into water
below the nest when danger threatens.

Drugs, sex, violence, hatred, pre-marital sex has become
the order of the hour for our youth…
Where is the NX-GEN heading?

Children, obey your parents in all things: for this is well pleasing unto the Lord. ((Colossians 3:20)

Look at these Hoatzin chicks; they leave the nest frequently,
Like how our children leave us without our knowledge…
What sort of spiritual nourishment do we regurgitate?
Ministry starts at home and GOD has given us children as gifts,

Lo, children are an heritage of the LORD: and the fruit of the womb is his reward. (Psalm 127:3)

It is our duty to take care of them, the way GOD wants us to…

Fathers, provoke not your children to anger, lest they be discouraged. (Colossians 3:21)

3 thoughts on “Hoatzin – The Stinker”