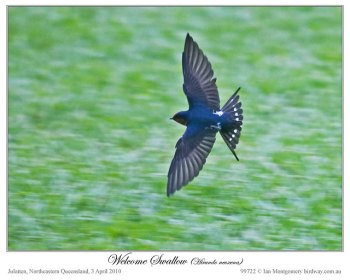 Birds Australia North Queensland had planned to visit Cooktown for Easter, which turned out to be very wet throughout northeastern Queensland. A few intrepid souls, presumably not camping, made it there, but a friend and I spent a few days at Kingfisher Park in Julatten near Mossman before returning home. We did manage to get out birding a few times between showers and one afternoon I spent an hour or two trying to photograph birds hawking for insects over the fish ponds of a nearby Barramundi farm. As is often the case, the poor weather brought both the insects and their avian predators down to low levels – poor light but good practice. 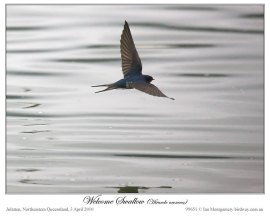 The birds consisted of a mixture of Welcome Swallows, Tree Martins and White-rumped Swiftlets, and I’ve posted images of all three to the website, though I’ve chosen the Welcome Swallow here as being the most photogenic. This is a familiar and widespread bird in Australia, though it is absent from the the arid centre and northern Western Australia and much of the Northern Territory. It is similar in appearance and habits to the Barn Swallow of the northern hemisphere, and like it builds a cup-shaped nest in sheltered sites, particularly buildings.

The first photo shows a bird hawking low over grass and obligingly spreading all its tail feathers to brake or turn. The second one is flying over the fish pond and the third is a photo taken some time ago of a bird perched beside Ross River in Townsville.

The name ‘Welcome’ emphasizes its familiarity, but it also suggests to me migration and a harbinger of Spring. In fact, unlike the Barn Swallow, it is resident over much of its range and only in Tasmania and southeastern Australia does it migrate for the southern winter but only as far as Queensland and Torres Strait. The Barn Swallow is a famous migrant traveling from Europe to Africa, North to South America and Northern to Southern Asia. Some even get as far as Australia and turn up annually in small numbers in northern coastal areas.

The Welcome Swallow is in the Hirundinidae Family of the Passeriformes Order. What a shot, Ian, of that Swallow flying with wings and tail out. I hardly get to see our swallows, they fly so fast.

The Welcome Swallow is metallic blue-black above, light grey below on the breast and belly, and rusty on the forehead, throat and upper breast. It has a long forked tail, with a row of white spots on the individual feathers. These birds are about 15 cm long, including the outer tail feathers which are slightly shorter in the female. The call is a mixture of twittering and soft warbling notes, and a sharp whistle in alarm.

Young Welcome Swallows are buffy white, instead of rufous, on the forehead and throat, and have shorter tail streamers.

The winter range in northern Australia overlaps with that of wintering Barn Swallow (Hirundo rustica), but the latter is readily separable by its blue breast band.[5] Welcome Swallows readily breed close to human habitation. The nest is an open cup of mud and grass, made by both sexes, and is attached to a suitable structure, such as a vertical rock wall or building. It is lined with feathers and fur, and three to five eggs are laid. Two broods are often raised in a season.

These birds are extremely agile fliers, which feed on insects while in flight. They often fly fast and low to the ground on open fields in large circles or figure 8 patterns. They will often swoop around animals or people in the open.

8 thoughts on “Ian’s Bird of the Week – Welcome Swallow”