An interesting video from YouTube by SmellLikeDirt caught my interest. Take a look and then I’ll comment on it.

The Sparrow has been written about before, but it is always nice to find out something else new about them. We know that the Lord created all the birds, but it seems as though the Sparrow just doesn’t get the attention like the more colorful birds. After watching the video, I trust you saw how God has provided for them to keep their species alive. 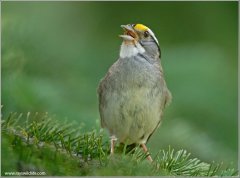 There are two adult plumage variations known as the tan-striped and white-striped forms. On the white-striped form the crown is black with a white central stripe. The supercilium is white as well. The auriculars are gray with the upper edge forming a black eye line.

On the tan form, the crown is dark brown with a tan central stripe. The supercilium is tan as well. The auriculars are gray/light brown with the upper edge forming a brown eye line. Both variations feature dark eyes, a white throat, yellow lores and gray bill. There is variation and some individuals may show dark lateral stripes of each side of the throat.

Most of us are just average people and sometimes may feel like you are not that important to others. But God loves us, even more than the sparrows and He hasn’t forgotten them.

Are not five sparrows sold for two copper coins? And not one of them is forgotten before God. (Luke 12:6 NKJV)

It’s true that the Sparrows are looked down on and sometimes just called, “Little Brown Jobs,” but they are created the way God wanted them in His plan for them. As Christians, not everyone can be the leader or the one in the “lime-light.” If that were true, then where would the followers be?

2 thoughts on “Birds of the Bible – Little Brown Jobs”