The Blue-footed Booby – The stupid fellas  ~  by a j mithra

The Blue-footed Booby (Sula nebouxii) is a bird in the Sulidae family which comprises species of long-winged sea birds… The natural breeding habitat of the Blue-footed Booby is tropical and subtropical islands off the Pacific Ocean most famously, the Galapagos Ecuador…

Blue-footed boobies are possibly one of the world’s most fearless birds! Indeed, lacking any instincts for fear and being quite clumsy on land make them easy prey for other animals. When Spanish settlers first encountered blue-footed boobies, they were amused by how easy it was to hunt these birds…

This is because the Blue-footed Booby is clumsy on the land. To make their point clear, Spanish settlers named this bird “bobo” which means “stupid fellows.”

If people call you “stupid”, just praise the Lord… For, God chooses the fools and the weak instead of the wise and the strong…

The booby’s eyes are placed on either side of their bill and oriented towards the front. They have excellent binocular vision. The Blue-footed Booby has permanently closed nostrils specialized for diving. They breathe through the corners of their mouths. When God created these birds, He knew that they need to dive deep for survival.. That is the reason that He took so much care in placing the eye at the right place and the closed nostrils , so that it does not drown…  Close up of a Blue-Footed Booby

God changed their shortcomings into their strength to glorify His name… That is because their trust was in God.. If we trust God, He can change our weakness into our strength…

And he said unto me, My grace is sufficient for thee: for my strength is made perfect in weakness. Most gladly therefore will I rather glory in my infirmities, that the power of Christ may rest upon me. (2 Corinthians 12:9) 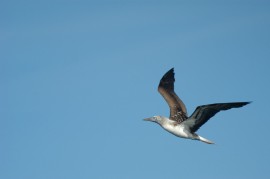 But, our Lord Jesus Christ turned ugly on the cross to show how much He loves us.. Can you not see His nail-pierced bleeding feet which came in search of us? So many time His presence has hovered over us, but, how much have we felt it?

For he shall grow up before him as a tender plant, and as a root out of a dry ground: he hath no form nor comeliness; and when we shall see him, there is no beauty that we should desire him. (Isaiah 53:2)

During the courtship, they also pick up small stones or twigs as building materials for their nests, but, strangely, they undo their nests later on just about the time that the female blue-footed booby is ready to lay eggs. They are not a seasonally reproducing species but are opportunistic in their breeding..

The Blue-footed Booby is a monogamous animal although they do have the potential to be bigamous. They reunite at their breeding grounds…

We too are going to unite soon with the Lord…  Jesus is on His way to take His bride and to live with her forever and ever…  Is the bride ready for takeoff?

For now we see through a glass, darkly; but then face to face: now I know in part; but then shall I know even as also I am known. (1 Corinthians 13:12) 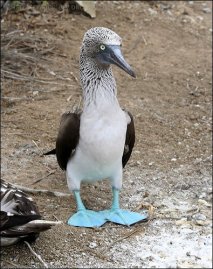 The Blue-footed Booby is strictly a marine bird and their only need for land is to breed, which they do along rocky coasts. They nest on bare black lava in a small dip in the ground. The female will turn to face the sun throughout the day so the nest is surrounded by excretion. The female Blue-footed Booby lays two or three eggs. Both male and female take turns incubating the eggs, while the non-sitting bird keeps a watch.

Since the Blue-footed Booby does not have a brooding patch, a patch of bare skin on the underbelly, it uses its feet to keep the eggs warm. Blue-foots are one of only two species of booby that raise more than one chick.

You may think that you do not have resources, like other to realize your dreams… But, all things are possible with God..

These female birds do not have a brooding patch, but still, they raise chicks with their feet and that too they raise more than one chick…

You may feel that you do not have beauty or talent or riches or influence to make your dreams happen…  When you have Jesus as your everything, nothing is impossible….

Blue-foots are one of only two species of booby that raise more than one chick. The males is specialized in diving in shallow waters. They must be fed frequently, so the adults constantly hunt for fish. The chicks feed off the regurgitated fish in the adult’s mouth. If the parent Blue-footed Booby does not have enough food for all of the chicks, it will only feed the biggest chick, ensuring that at least one will survive.

Blue-footed Boobies are specialized fish eaters feeding on school fish like sardines, anchovies, mackerel, flying fish, squid and offal. It dives into the ocean, sometimes from a great height, and swims underwater in pursuit of its prey. It hunts singly, in pairs or in larger flocks. They travel in parties of 12 or so to areas of water with large schools of small fish. When the lead bird sees a fish shoal in the water, it will signal the rest of the group and they will all dive together to catch the fish.

Like these birds, we as believers and church builders need to learn to dive together into the Living water..

These birds signals to the rest of the group when it sees a shoal of fish..

How many of us signal our co-workers when we see a blessing?

Surprisingly, individuals do not eat with the hunting group, preferring to eat on their own, usually in the early morning or late afternoon. They will point their bodies down like an arrow and dive into the water. Plunge diving can be done from heights of 33–100 ft and even up to 330 ft (100 m). These birds hit the water around 60 mph (97 km/h) and can go to depths of 82 ft (25 m) below the water surface. The prey is usually eaten while the bird is still under water. Males and females fish differently which could contribute to the reasons that blue foots, unlike other boobies raise more than one young.

The male is smaller and the tail is larger for its body which enables the male to fish in shallow areas instead of just deep waters. The tail can flatten out easier enabling him to change direction in the shallow water. The female is larger and can carry more food. The food is then regurgitated to the young. The males feed the young for the first part of the incubation period. This is done because the males can bring back food quicker than the female. When the demand for more food takes over the female provides the food to the young… These female birds are larger and carry more food…

Even our bridegroom Jesus Christ wants us to do more than what He had done… That is why He says,

Verily, verily, I say unto you, He that believeth on me, the works that I do shall he do also; and greater works than these shall he do; because I go unto my Father. (John 14:12)

Now never ever say that you can’t do this or can’t do that… We have been called to say that I can do all things through Christ that strengthens me, and also to do greater things than what Jesus did…

One thought on “The Blue-footed Booby – The Stupid Fellas”