“Darwin’s Finches” – No Proof of Evolution

Genesis 1:21 So God created… every winged bird according to its kind. And God saw that it was good. 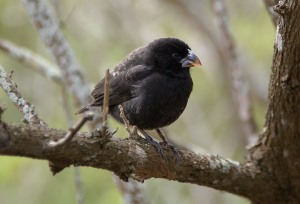 During his visit to the Galapagos Islands, Charles Darwin saw that each island was populated by a little finch. These birds were all very similar; yet, from one island to another there were some differences in the size and shape of the beak. Darwin reasonably concluded that in the distant past a pair of these birds had been blown 600 miles from the mainland and had since multiplied and spread. The environment on each island was slightly different, and the birds had developed specialized beaks to exploit the different food sources. It seemed to Darwin that here was a unique example of evolution in action where 13 different species had arisen from just one mating pair. A species is defined by the ability to reproduce; thus, a sterility barrier separates one species from another. Textbooks use Darwin’s finches to claim that new species have been produced, demonstrating evolution in action. However, the facts are that at least six of these different birds are known to interbreed and thus by definition are not new species at all but simply varieties within a single species. Moreover, DNA studies reveal very little difference between any of these birds, and there is no evidence of new genetic material, which is essential if evolution actually took place. Darwin’s finches offer no support for evolution. However, they do support the Bible when it teaches that, like every other creature, the birds have simply reproduced “after their own kind.” God has so designed His Creation that while it is possible for creatures to adapt perfectly to individual environments, there is still stability of the basic “kind.”

“Darwins Finches” are part of the Tanagers and Allies-Thraupidae Family in the Passeriformes Order.