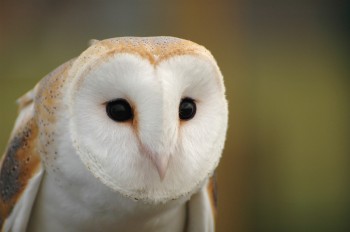 The Lord has created another interesting and fantastic bird, the Barn Owl. The Owls are mentioned in the list of unclean birds the Israelites were not to eat. The Bible mentions several different kinds of owls and that is possibly why the taxonomists today divide them at least into two different families. Within those families, especially the larger one, Strigidae, the are different groupings. The Barn Owl family, Tytonidae, all seem to have this heart-shaped face you will read about and see. Some of the other Bible versions call it the “white owl.” Most of the ones I found photos of do have a white face or almost white face.

Barn-owls (family Tytonidae) are one of the two families of owls, the other being the true owls, Strigidae. Barn Owls are medium to large sized owls with large heads and characteristic heart-shaped faces. They have long, strong legs with powerful talons. They also differ from Strigidae in structural details relating in particular to the sternum and feet. 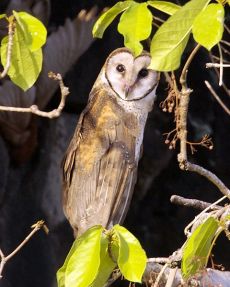 The Barn Owl is a pale, long-winged, long-legged owl with a short squarish tail. Depending on subspecies, it measures about 25–45 cm (9.8–18 in) in overall length, with a wingspan of some 75–110 cm (30–43 in). Tail shape is a way of distinguishing the Barn Owl from true owls when seen in flight, as are the wavering motions and the open dangling feathered legs. The light face with its heart shape and the black eyes give the flying bird an odd and startling appearance, like a flat mask with oversized oblique black eyeslits, the ridge of feathers above the bill somewhat resembling a nose.[Wikipedia]

The barn-owls’ main characteristic is the heart-shaped facial disc, formed by stiff feathers which serve to amplify and locate the source of sounds when hunting. (See Calculating Owls below) Further adaptations in the wing feathers eliminate sound caused by flying, aiding both the hearing of the owl listening for hidden prey and keeping the prey unaware of the owl. Barn-owls overall are darker on the back than the front, usually an orange-brown colour, the front being a paler version of the back or mottled, although there is considerable variation even amongst species. The bay-owls closely resemble the Tyto owls but have a divided facial disc, ear tufts, and tend to be smaller.

On average, within any one population males tend to be less spotted on the underside than females. The latter are also larger, as is common for owls. A strong female Western Barn Owl of a large subspecies may weigh over 550 g (19.4 oz), while males are typically about 10% lighter. Nestlings are covered in white down all over, but the heart-shaped facial disk is visible soon after hatching.

the little owl and the short-eared owl, the barn owl (Deuteronomy 14:16 ESV)

Its head and upperparts are a mixture of buff and grey (especially on the forehead and back) feathers in most subspecies. Some are purer richer brown instead, and all have fine black-and-white speckles except on the remiges and rectrices, which are light brown with darker bands. The heart-shaped face is usually bright white, but in some subspecies it is browner. The underparts vary from white to reddish buff among the subspecies, and are either mostly unpatterned or bear a varying amount of tiny blackish-brown speckles. It was found that at least in the continental European populations, females with more spotting are healthier on average. This does not hold true for European males by contrast, where the spotting varies according to subspecies. The bill varies from pale horn to dark buff, corresponding to the general plumage hue. The iris is blackish brown. The toes, as the bill, vary in color; their color ranges from pinkish to dark pinkish-grey. The talons are black. 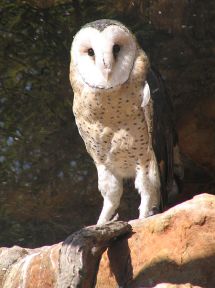 The barn owls are a wide ranging family, absent only from northern North America, Saharan Africa and large areas of Asia. They live in a wide range of habitats from deserts to forests, and from temperate latitudes to the tropics. The majority of the 16 living species of barn owls are poorly known. Some, like the (Madagascar) Red Owl, have barely been seen or studied since their discovery, in contrast to the Common Barn Owl, which is one of the best known owl species in the world. However, some sub-species of the Common Barn Owl possibly deserve to be a separate species, but are very poorly known.

Contrary to popular belief, it does not hoot (such calls are made by typical owls, like the Tawny Owl or other Strix). It instead produces the characteristic shree scream, ear-shattering at close range. Males in courtship give a shrill twitter. It can hiss like a snake to scare away intruders, and when captured or cornered, it throws itself on its back and flails with sharp-taloned feet, making for an effective defence. Also given in such situations is a rasp and a clicking snap, produced by the bill or possibly the tongue.

Couldn’t pass up the opportunity for some verse of the “heart.”

I will praise thee, O LORD, with my whole heart; I will shew forth all thy marvellous works. (Psalms 9:1 KJV)
LORD, thou hast heard the desire of the humble: thou wilt prepare their heart, thou wilt cause thine ear to hear: (Psalms 10:17 KJV)
Let the words of my mouth, and the meditation of my heart, be acceptable in thy sight, O LORD, my strength, and my redeemer. (Psalms 19:14 KJV)
Wait on the LORD: be of good courage, and he shall strengthen thine heart: wait, I say, on the LORD.
(Psalms 27:14 KJV)

Owls – Birds of the Bible
Calculating Owls – Find out how the Barn Owl finds things.

Some information from Wikipedia