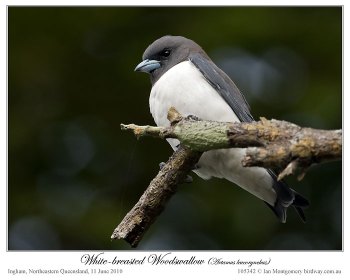 Some species are a source of continual pleasure even when they are very common, such as the White-breasted Woodswallow, which is to be seen daily in Northeastern Queensland, perching conspicuously on power-lines or trees and chasing insects, swallow-like, in small flocks. They are attractive birds, fun to watch and courageous, frequently mobbing raptors.

White-breasted Woodswallows “hanging out” by Ian

Woodswallows get their name from a superficial similarity to true swallows, though in flight they are stockier and lack forked tails as in the second photo. They aren’t related to swallows and form a family, the Artamidae, with the larger more crow-like Australian Magpie, Butcherbirds and Currawongs. The White-breasted Woodswallow is widespread through eastern and northern Australia and is resident in northern coastal areas but migratory or nomadic in other parts of its range.

They are sociable birds, as can be seen in the third photo, and often roost together in large numbers. The fourth photo shows a roost on power-lines near a set of traffic lights on a busy Townsville intersection. When I took the photo, at dusk, about 200 birds were present and the one looking down towards the camera had just elbowed its way into the middle of the row after landing on birds already in place.

White-breasted Woodswallow “Squeezed in” by Ian

Back at the website, the ‘Current Picks’ (Australian, New World, Old World and Other Wildlife) are:
Shy Albatross
Purple Honeycreeper
Razorbill
and Platypus

I’ve reformatted the Image Purchases page and published a scale of prices for digital images for the conservation- and/or education-related projects that account for most of the Birdway business: http://www.birdway.com.au/printpurchases.htm

Love that last photo, Ian! Can they breathe?  :)

As Ian said, the Woodswallows belong to the Artamidae Family. There are 11 members and they live mainly in Australia and New Zealand. They are part of the Passeriformes Order and “they are among the very few passerines birds that soar, and can often be seen feeding just above the treetops.”

“The woodswallows have an Australasian distribution, with most species occurring in Australia and New Guinea. The Ashy Woodswallow has an exclusively Asian distribution, ranging from India and Sri Lanka through South East Asia to China, and the most widespread species is the White-breasted Woodswallow, which ranges from Peninsular Malaysia through to Australia in the south and Vanuatu and New Caledonia. The group reaches the easternmost extent of its distribution in Fiji with the endemic Fiji Woodswallow.” (Wikipedia)

Even the sparrow has found a home, And the swallow a nest for herself, Where she may lay her young— Even Your altars, O LORD of hosts, My King and my God. (Psalms 84:3 NKJV)