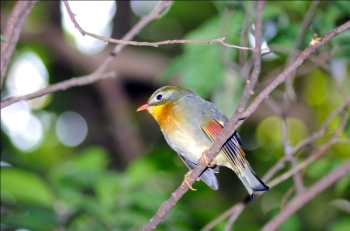 Red-billed Leiothrix – The Rain Seeker… ~ by a j mithra

Red-billed Leiothrix are native to Southern Asia ranging from central Himalayas in India and Nepal, eastwards to Burma and Vietnam. Leiothrix prefer to inhabit underbrush at all elevations with a cover of dense vegetation near the ground. These birds are found at elevations 700 m to 2000 m in winters and 1500 m to 2700 m in summers. Flocks of Leiothrix’s have been known to fly up to elevations of 4500 m for a short period of time.

These birds favor areas with at least 40 inches of rain.

He has promised to pour His spirit on all flesh…

For I will pour water upon him that is thirsty, and floods upon the dry ground: I will pour my spirit upon thy seed, and my blessing upon thine offspring: (Isaiah 44:3) 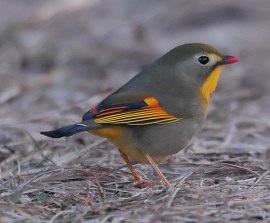 The leiothrix can usually be found in a group of about ten to thirty birds during the non-breeding season; however, during the breeding season the birds break off into pairs and become territorial.

The presence of the Lord flows like a river during corporate worship..

A Song of degrees of David. Behold, how good and how pleasant it is for brethren to dwell together in unity! It is like the precious ointment upon the head, that ran down upon the beard, even Aaron’s beard: that went down to the skirts of his garments; As the dew of Hermon, and as the dew that descended upon the mountains of Zion: for  there the LORD commanded the blessing, even life for evermore. (Psalm 133)

Though we need to dwell together in unity, at times, like these birds who break off into pairs, we need to have an intimate and personal relationship with our Saviour..

These birds seem to teach us about the importance of Praise and Prayer isn’t it? These birds have a song which consists of short powerful notes that are repeated continuously throughout the year but it is more persistent during the breeding season… This period usually lasts from early April until September and they are usually found around well watered areas.

And one cried unto another, and said, Holy, holy, holy, is the LORD of hosts: the whole earth is full of his glory. (Isaiah 6:2,30)

All the ends of the world shall remember and turn unto the LORD: and all the kindreds of the nations shall worship before thee. (Psalm 22:27)

The Leiothrix is in the Timaliidae Family of Babblers and Parrotbills which are in Passeriformes Order. There are two Leiothrix in the family, the other being a Silver-eared Leiothrix. Both are very colorful birds. Maybe because they seek rain, the Lord gave them colors that are bright like the rainbow.

One thought on “Red-billed Leiothrix – The Rain Seeker…”