Since the first Birds of the Bible – Partridge was written two and a half years ago a few facts have changed.

1.  At that time there were 155 species in the Phasianidae family. Now they are counting 181 members in the family and we have the Birds of the World listed here. Also, the blog was only a month or so old. I am not so sure that new birds were found as much as to how they classify the birds. Some lists count them one way and another counts them differently. As for this site, we use the I.O.C. list of world birds. The 2.6 Version shows 181 and so do we.

Now therefore, let not my blood fall to the earth before the face of the LORD: for the king of Israel is come out to seek a flea, as when one doth hunt a partridge in the mountains. (1 Samuel 26:20 KJV)

was not explained at all. I was still new to blogging and afraid to explain it. So now, let’s see what the verse is referring to with its reference to the partridge.

According to I Samuel 26, Saul, with his elite soldiers, was pursuing David to kill him. Saul and his army camped for the night and the Lord put them into a deep sleep. While asleep, David, sneaked in and took took the items, but would not kill Saul, even though he had the opportunity.

The LORD forbid that I should stretch forth mine hand against the LORD’S anointed: but, I pray thee, take thou now the spear that is at his bolster, and the cruse of water, and let us go. So David took the spear and the cruse of water from Saul’s bolster; and they gat them away, and no man saw it, nor knew it, neither awaked: for they were all asleep; because a deep sleep from the LORD was fallen upon them. (1 Samuel 26:11-12 KJV)

Later, after awaking, the two talk to each other across a great distance. (V.14) Saul recognizes David’s voice (V.17), and then starting in verse 18, David is asking why the King is pursuing him. David is not his enemy, is blameless, and not trying to cause the problem.

When we get to the 20th verse, his reference is to a bird that is a harmless, non-aggressive, non-confrontational bird – the partridge.
“as when one doth hunt a partridge in the mountains”
When hunted, a partridge will try to walk away. If that doesn’t work, the bird will fly a short distance and land, again trying to avoid the captor. To catch the bird, some keep this up until they wear the partridge down and then walk up to them and bludgeon them. 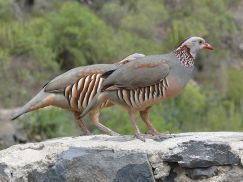 Matthew Henry says, “a poor game for the king of Israel to pursue. He compares himself to a partridge, a vert innocent harmless bird, which, when attempts are made upon its life, flies if it can, but makes no resistance. And would Saul bring the flower of his army into the field only to hunt one poor partridge? What a disparagement was this to his honour! What a stain would it be on his memory to trample upon so weak and patient as well as so innocent an enemy! James 5:6, You have killed the just, and he doth not resist you.”

Jamieson, Fausset, and Brown Commentary, “as when one doth hunt a partridge — People in the East, in hunting the partridge and other game birds, pursue them, till observing them becoming languid and fatigued after they have been put up two or three times, they rush upon the birds stealthily and knock them down with bludgeons [Shaw, Travels]. It was exactly in this manner that Saul was pursuing David. He drove him from time to time from his hiding-place, hoping to render him weary of his life, or obtain an opportunity of accomplishing his destruction.”

David later said in the Psalms:

But let all those that put their trust in thee rejoice: let them ever shout for joy, because thou defendest them: let them also that love thy name be joyful in thee. For thou, LORD, wilt bless the righteous; with favour wilt thou compass him as with a shield. (Psalms 5:11-12 KJV)